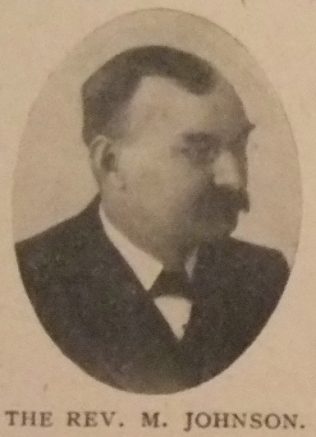 Matthew was born on 13 May 1854 at Benton, Northumberland to parents Thomas Johnson and Martha Wilson. Matthew was one of twelve siblings identified in census returns, born over a twenty-five year period. (Eight of the siblings were born to Thomas’ first wife, Dorothy.) Thomas was a coal miner.

After an early education at the elementary school, Matthew attended Ramsey’s Academy, where, for a while, he was an assistant teacher. He then moved into business until he entered the ministry.

Three of Matthew’s brothers were local preachers. His eldest (full) brother, John, was a well-known and respected leader of trade unionism in Co. Durham and represented Gateshead in the House of Commons from 1904-1910.

Matthew became a local preacher at the age of nineteen. When he received the call to ministry, he accepted after some hesitation on the grounds of health. Matthew entered the Theological Institute, Sunderland in 1878. He was a successful student heading the list in each examination and being the only one to obtain full marks for the written sermons.

Matthew spent five years in his first appointment, living at Cockermouth. The length of stay for a probationer demonstrated his ability as a preacher and circuit minister.

In his second circuit, Matthew was the third minister. As such he was free from a good deal of circuit business and was able to do a good deal of literary work, writing for the Quarterley Review, other Connexional magazines and also for the secular press.

At Hexham, the historic and literary connections met his aesthetic taste. There he spent seven of the most fruitful and happy years of his ministry. Membership increased by seventy-seven and the income of the Hexham chapel nearly doubled during his time there.  Matthew founded a Literary Association, of which he was the first president and also founded the United Temperance Council in Hexham.

By the end of his time at Hetton, Matthew’s eyesight had become so bad that he had to seek superannuation. He settled back in Hexham.

All Matthew’s ministry took place in within the boundaries of the old Sunderland District. He served on the Connexional Probationers’ Examining Committee and also served as Probationers and Candidates Examiner. For many years he was treasurer of the ‘North of England Preachers’ Association, and secretary of the ‘Dialectic Club’.