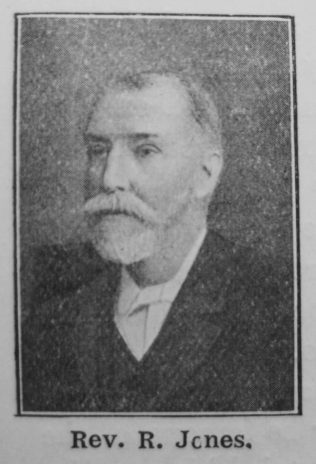 Transcription of Obituary in the Primitive Methodist Magazine by Joseph Ferguson

The late Rev. Robert Jones, whose death is a loss to the Church militant, was born April 1849, at Plough Lane, near the historic city of Chester, the Roman Deva and Castra and the Celtic Caerleon. Cradled in a religious atmosphere, he heard divine words before he knew their meaning, and listened to the songs of the sanctuary before he understood their import. His father, whom we knew, was a local preacher, by the light of whose ministry and life many saw the way to God. Neither long journeys, nor dark nights, nor wet days hindered him from fulfilling his appointments. His mother also long knew the Lord and walked in the joy of divine communion. Robert’s home was the House of God, and to many the gate of Heaven; under its roof public services were held, and the servants of God, unconsciously assisted the parents in creating a religious atmosphere in which our friend lived, moved, and had his being. He never seemed to get away from the influence of his home life. Robert’s early education was at the Anglican School of Christleton. He was a joyous, romping happy lad. Nevertheless his love of the good was strong and swayed his life and presaged the quality of his coming manhood. At the parish school this little Free Churchman was a favourite with the bachelor rector and his sisters, and so frequently visited at their elegant home – here he saw beauty and taste. The good clergyman, who in Christian catholicity towered above his class, presented Robert with many books which incited mental thirst. The light our friend gained from these books caused him to gaze for a fuller morning. At the age of thirteen he left school, bearing away honour  and desire, and was apprenticed to a joiner and builder and faithfully finished his term. At the age of eighteen, in a Wesleyan Church, he received Christ into his heart as his life and Lord, and at once joined our Church in George Street, Chester, where he came under the potent and formative influence of Mr. J.P. Moore of blessed memory. He, however, frequently declared that parental influence and his early home were the main factors in his decision for Christ. Only three months after his conversion the Church recognised his fitness for high forms of usefulness and called Robert to preach. His Circuit examination revealed his knowledge of Methodist Theology and his aptitude to teach the “Truth as it is in Jesus.” His moral and mental growth was significant and prophetic. Another door was now opened to Robert by that invisible hand to which no bolts nor bars are irresistible. He was shortly called to the full work of the ministry. This call he obeyed, and so in 1869 he entered our Theological Institute at Sunderland. In 1870 the Conference stationed him at Manchester III as his first Circuit; the Rev. J. Mould was his superintendent. After three years’ good work he removed to the Liverpool II Circuit, and had the ministerial fellowship and guidance of the now sainted and Rev. W. Inman. Here he finished his ministerial probation, was ordained, and subsequently married to Elizabeth, eldest daughter of Mr. Jno. Thomason, of Lymm, Cheshire. She has been a helpmeet indeed, and she and her children live to suffer and mourn the loss of a husband and a father whose name it was an honour to bear.

In all these Circuits he loved and was beloved, and has left behind many whose hearts are saddened by his unexpected departure.

He was a worker of no mean order. He was too original, his love to God and the Primitive Methodist Church too sincere and intense to allow himself to live upon the service and sacrifice of his brethren who had gone before him. He superintended the building of a Church and Schools at Knowlwood, Irwell Vale Church in the Bury Circuit, the Jubilee Drive Church in the Liverpool III. Circuit, and others we need not name.

In the old Manchester District he spent the whole of his ministerial life, except the last two years at West Bromwich, in the West Midland District, to its undoubted advantage. His own District honoured him by electing him to fill, at different times, all the offices at its disposal by several times sending him as a delegate to Conference, and on two occasions asking Conference to appoint him as the General Committee Delegate. His new and last District soon recognised his ability and judgment, and appointed him to the office of District Building Committee Secretary, elected him as Delegate to the last Conference, and upon several occasions sent him with others as a special deputation to settle matters of importance. His ministerial brethren of all districts knew him, and appointed him Treasurer of the “Itinerant Preachers’ Friendly Society,” and the Conference of 1900 did itself the honour of calling him to be its Secretary. In these days when special terms are utilized in all departments of literature, we say that our friend’s environment, as we have seen, was most helpful, and the law of relationship most potent. His father was an intelligent local preacher for more than sixty years; his precious mother a Methodist of the old order for more than half-a-century; his eldest brother, John, well-known in civic office in his own ancient city, and widely known and loved by many ministers in our Church, has been a local preacher for thirty-seven years, class-leader seventy-seven, and Circuit steward for thirty years; his second brother, William, has been a member thirty-five years, and Church steward for twelve. The sainted father and mother could not be satisfied until they could say to their Lord, “Here are we and the children Thou hast given us.” In the home life of our lamented friend, the same spirit of Connexional loyalty, and Christian goodness is perpetuated, and like a life-stream will run among the generations yet to be. The two sons and daughter are members of our Church, and are doing credit to their father’s example. Our sainted brother was an exemplary Christian minister, magnanimous and pure-minded. His colleagues and ministerial friends bear testimony to his generosity and encouraging appreciation of the gifts and powers of others. He was a wise disciplinarian. He did not believe in the infallibility of our “Rules” and “Regulations” – these were not quite perfect, yet generally wise. Sometimes to him legal rights were moral wrongs, and necessarily called for adjustment by New Testament principles. His heart was always right, and the light of its tempered justice gleamed through all his precedure in deliberative assemblies. We sometimes differed from him, but his evident intention always elicited our admiration. He was an earnest preacher. His composition was not without that subtle beauty which charms cultivated ears and often prepares the way for the truth that saves. He was no dilettante – no novice. His aim was to win souls – to save men. As a superintendent minister none surpassed and few equalled him. His dominating question was – “What is right and wise to do – ?” the answer becoming clear to him, his course was straight and effective. As a fellow minister he was manly and brotherly. The ministers of all Free Churches loved him and listened for his judgment. He judged men by unquestionable data; by what they were, and not by what they had.

Domestically, his home life was simple and ideal. His wife was his queen; her interests and pleasure were considered with discreet gallantry – her sad tears are the tribute to his loving faithfulness. His children deeply loved him, and their happiness was the law of his life. Their great loss can only be compensated by the comfort and guidance of an everpresent covenant-keeping God.

Our friend has gone, and yet in memory, in influence, and in ministry, still remains. The law of love still abides, and in some way must ever operate. His life’s autumn was short. Twice before in his principal pulpit (January 6th, 1901, and on September 22nd, 1901) he had fainted; but on Sunday, June 8th, 1902, in the same Lyng Church, while expounding his Text – Acts iv., 31-35, and speaking the words that “Christ’s earthly work was completed,” he fell down in the pulpit and his soul ascended to God. Our friend finished his work unexpectedly, and was carried by angels from God’s temple on earth to the not made with hands “House Eternal in the Heavens.” What an exit! To him what a gain! But to those who remained on earth what a shock! His life was a living epistle, his death a triumph. By faith we saw the line of light up which he went. We saw his “abundant entrance” and heard the music of the Divine “Well done, good and faithful servant, enter thou into the joy of thy Lord.” The character of our brother’s death perplexed medical science. After both of his former collapses he affirmed to the Rev. S. Parlow, his beloved colleague, that he felt nothing painful till he fell, and the doctors, after examination, declared that he was organically healthy and sound, and even on the morning of his departure he was apparently in splendid health. Our lives are in God’s hands.

Our friend’s mortal remains were borne on Wednesday, June 11th, to the Lyng Church, which was crowded and in which an impressive service was held, attended by many ministers and friends. On the arrival of the body at Chester the cortege, accompanied by the members of the family and ministers from various parts of the Connexion, proceeded to George Street Church, where an affecting and solemn service was held, and from thence the mournful procession journeyed about four miles to the Primitive Methodist Cemetery, Saughall, where the body was committed by the Revs. J. Travis and J. Graham. There in the quiet stillness of a beautiful country village was left all that was mortal of one who was faithful in life and ready in death. His death Was improved by the Rev. J. Jackson, of Kirkby-Stephen, Westmoreland, whose text was Gen. v., 24, “And Enoch walked with God: and he was not; for God took him.”

Robert was born in April 1849 at Chester, Cheshire, to parents William, a railway labourer, and Emma.