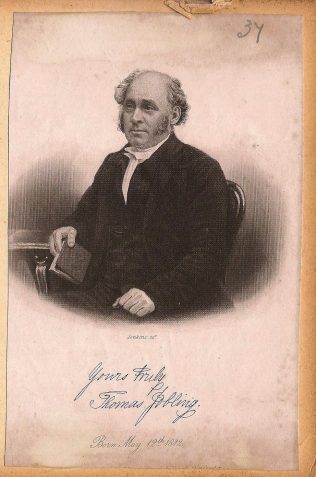 Thomas was born at Whickham, Co Durham on May 28 1812 to parents George Jobling and Elizabeth Robson. He was baptised on 30 August 1812 at Whickham..

Thomas was converted under the preaching of the Wesleyan minister Hodgson Casson, along with Joseph Spoor and his sister Jane. However, they found the spirit of the early Primitives more in keeping with their fervent souls, and they joined them.

Curry describes the impact of Thomas on the Isle of Man in the 1840’s. “Jobling was a man of great energy and evangelistic enthusiasm. The time was ripe. The ground had been prepared, and the seed patiently sown, and he possessed just the temperament for this rich harvest field. How great was the ingathering may be judged from the following statement. When Jobling went to the Island in 1840, the membership stood at 838, while in 1842, including those on trial, it had risen to over 1,700, and a sixth preacher was called out.”

Thomas was General Secretary of the Mission Committee from 1865 until he superannuated.

W Curry, The Story of Primitive Methodism in the Isle of Man.

W Leary, Directory of Primitive Methodist Ministers and their Circuits,