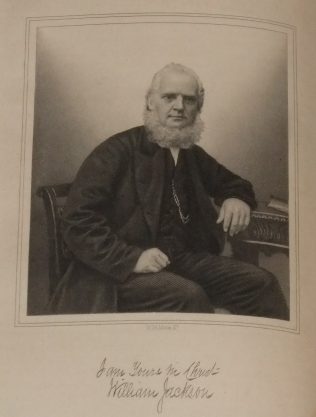 William was born on 30 March 1827 at Ilkley, Yorkshire. When he was young, William had to support his widowed mother and family. The family moved to Bradford in 1841 where he was converted and joined the Primitive Methodists. William was self-educated as a young man.

William was called to the ministry in March 1847 by the Bradford circuit to supply for John Davidson, who had gone to Canada.

The writer of his obituary, C Smith, says of him (perhaps unfairly); ‘He became ‘popular’; his services were in constant requisition. We have not a word to say against ministerial fame, nor one in disparagement of Bro. Jackson; but we must put it on record, as our deep conviction, that he laboured for it, sought it, and gloried in it; but as we are not judges of motives we put on him and his ministry the most charitable construction.’