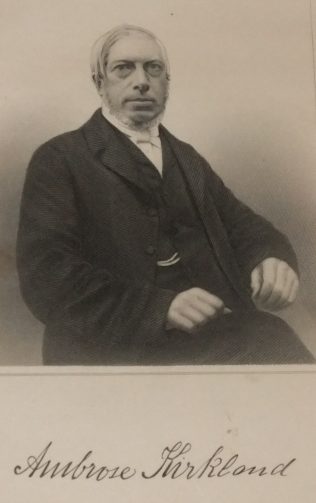 Ambrose was born on 18 November 1816 at Barlastone, near Market Bosworth, Leicestershire. He was converted at the age of thirteen following a camp meeting in his village. Ambrose took his first local preaching appointment on his 16th birthday. In 1836, he entered the regular ministry initially called to work in his own Ashby de la Zouch circuit.

Whilst at Belper, Ambrose became a total abstainer.

Ambrose’s journal records. ; At Keighley, 1841, ‘there was a panic on in the Cotton trade.. Many of the people were factory hands, and had very little to do and were very poor, had but little money for anything.  When Circuit Quarter day came, very little money came in. What did come my Super needed. So I did not get a penny beside board and lodgings £2 10s Od. But to the honour of Keighley be it said, when they improved and became better off they sent me the back salary they owed me.’

‘I removed from Keighley to Preston Brook, in Cheshire, in 1841, on a short winter’s day arrived late in the afternoon. After tea I started for Frandley five miles in the dark, got lost on the way and walked into a brook that ran across the ,road, the night being dark I could not see the water, but I got out safely and finally got to Frandley, and had to preach in wet shoes & stockings. This taking up of duties immediately on arriving in the new circuit recalls the section in the P.M. General Minutes Consolidated under Travelling Preachers; How to spend their time: (quoted from the 1849 Minutes:) “A rule cannot be made to prescribe exactly what time each travelling preacher shall spend in sleep, study and ministerial labours : but when health and circumstances will allow, he must spend not more than  seven hours in sleep each night, four hours in study each day, and the remainder of his time in family visiting and other active ministerial labours, allowing necessary deductions for the time occupied in taking his meals.” The last provision seems rather a grudging concession to the flesh.’

Three happy years were spent at Chorley, 1858-61. ‘ I got three Chapels built, one at Orrel, one at Shevington another at Roby Mill; and am happy to say each out of debt and a goodly number of souls converted to God.’

At Liverpool, 1872, ‘the Society were unhappily divided into two parties ..from this cause there was often unpleasantness in official meetings:’ Ingenuously he adds, ‘But I hear some of the parties are dead and others have removed, and I am glad to learn that the Circuit is now in a much better condition.’

His obituary records that as a minister he was unpretentious, yet faithful in word and doctrine, and was successful in leading many souls to Christ. He was often required to build new chapels (17 in total), schools (4) or enlarge chapels already built.