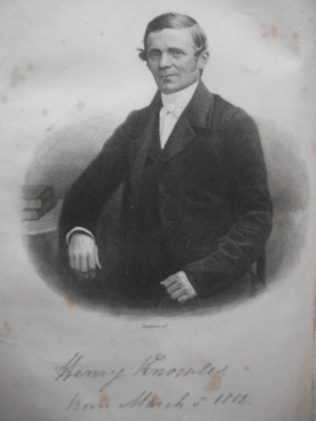 Henry was apprenticed from the age of 14 for seven years. He was inspired by the preaching of Thomas Holliday, who was imprisioned for preaching in the open air. At the age of 16, Henry was converted and soon became a local preacher. His master would not release Henry from his indentures until he was 21. He was then able to commence his itinerant ministry.

His obituary records that during his travelling ministry, Henry and his colleagues increased membership by over 1600 on his stations. Henry was also responsible for over 20 chapels, preparing the plans and specifications himself.

His obituary reads; ‘He was a true paster, and in the hour of trouble, sickness or death, he was always a comforter and friend. His sympathies were not confined to those within the pale of the church, but he often visitied the homes of the poor, going from house to house, his visits being always welcome.’

‘His preaching, like that of many of our early ministers, was full of glow and fire.’

Henry became Chairman of the Hull District. In 1872 he was appointed treasurer of the Preachers Friendly Society.