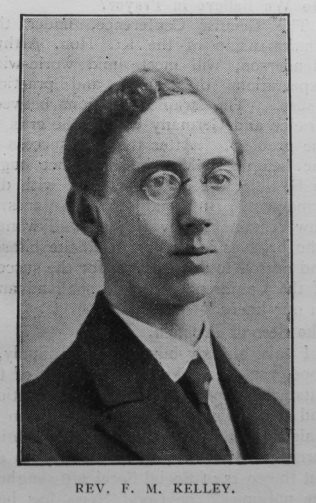 FRANK MUSSON KELLEY: born at Froghall, on 23rd August 1894, the son of a former President of the Primitive Methodist Conference. He was educated at Leeds High School and entered Hartley College in 1914. Three years later at Brighton, he began a distinguished ministry which spanned sixty-seven years, forty-four of them in the active work.

He served in the following circuits: Clay Cross, Laxey (Isle of Man) Forest Hill, Weston-super-Mare, Bournemouth, Kingston-on-Thames, Cardiff Wesley, London (Kilburn and Hampstead). He returned to the Kingston-on-Thames Circuit for the period leading to his retirement at Wallington in the Sutton (Surrey) Circuit in 1961.

In 1920 he married Rene Cresswell and so began a partnership which has been a blessing to Methodist people in many churches and circuits. His ministry was notable for his forthright preaching and his caring pastoral work. He was no false shepherd, but was constantly mindful of the needs of the flock, for which he spent himself. He possessed a sharpness of mind which enabled him quickly to analyse situations and arrive at the heart of the matter, an invaluable asset for the administrator. He read widely, remaining au fait with current events right to the end of his life and could converse on most subjects with an informed intelligence. In his long retirement he remained active, preaching regularly and leading classes and fellowship meetings as long as his health permitted. When advancing years precluded such activity, he wrote many loving letters and was loyal in his attendance at worship to the end.

Frank was born on 23 August 1894 at Froghall, Staffordshire to parents William Musson Kelley, a PM minister, and Louisa Jane Gerrard.

He married Adelaide Marion (Rene) Cresswell (1894-1988) in the spring of 1920 at Brighton, Sussex. Birth records identify one child.

Frank died on 1 December 1984 in the Sutton Registration District, Surrey.