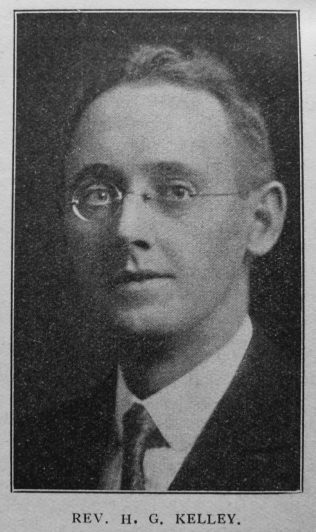 HAROLD GERRARD KELLEY: born at Silverdale, Staffordshire, on 1st October 1897. He was educated at West Leeds High School and then worked as a clerk in a wood-yard in Hull. During the First World War he was a sergeant in the Pay Corps, serving mainly in Egypt and Palestine. As a result of his wartime experience he became certain of his call to the ministry and, like his father and elder brother, received his theological training at Hartley College.

After a probationary period in the Penge and Bromley Circuit, he served in the following circuits: Reading, Bridlington, Kingsley and Frodsham, Birkenhead (South), Chester (George Street), Basingstoke, London (Sydenham and Forest Hill) and Leeds (Cardigan Road). Whilst at Reading he married Dorothy Cooper who was to be his lifelong companion in marriage and ministry, the inspiration for a supremely happy home life and supporter and encourager of all he did.

At the end of the Second World War he had responsibility for the restoration of two war-damaged churches and, later, arrangements for three schemes of circuit amalgamation. The successful outcome illustrated his fine administrative and pastoral gifts. On retirement, he moved to Alwoodley, Leeds, returning to the active work for one year, and finally to Sidcup to be near his daughter. Here he entered fully into the life of the church and continued to preach almost up to his ninetieth birthday.

Harold Kelley was an excellent example of the Methodist minister at his best. Modest, completely dedicated, faithful to the revelation of the love of God received in experience and by diligent study, his preaching brought people of all ages into the assurance and comfort of the Christian faith. He always had time for people in their moment of need and his pastoral ministry was something to be treasured. To his colleagues he appeared a man of deep and independent thought and always loyal and generous. It seemed fitting that he should pass from this life on All Saints Day 1988 in the ninety-second year of his age and the sixty-eighth year of his ministry.

Harold was born on 1 October 1897 at Silverdale, Staffordshire, to parents William Musson Kelley, a PM minister, and Louisa Jane Gerrard.