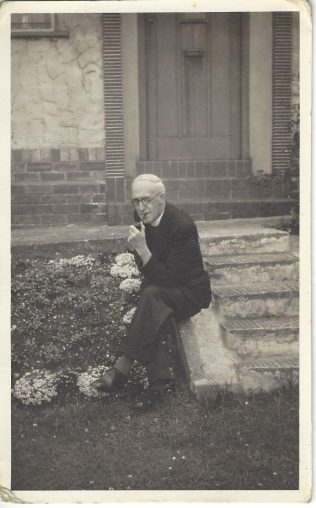 Born at Stoke-on-Trent in 1889. He spent some years in business, and after a term as Lay Pastor he offered for the Ministry.

He was trained at Hartley College, and served at Cheltenham, Coleford, Swindon, Pontefract, Luton, Oldham and Norwich.

Of a finely tempered and sensitive spirit he had gifts of passion and thought which were revealed in his sermons, prayers, and private interviews. He had hammered out on the anvil of his mind a faith which was always being exposed to and tested by the challenge of wide reading and the spirit of the age.

It was a stimulus to those who listened to him to feel that nothing was being taken for granted, nothing being prayed for or spoken about, which did not come from a deep yet humble conviction of his heart. To that inner loyalty he would yield to no outward temptation to trim or compromise. His passion was the truth as it is in Christ Jesus.

His sensitive nature and real humility of spirit brought to him a heavy cross. Yet this very cross made him a sympathetic and effective pastor to his people, and to many who were outside the Church.

After struggling for months against failing health, and even recovering sufficiently to preach on the last Sunday of his life, he passed away on 8th August 1951, in the thirty-fifth year of his ministry and the sixty-second of his age.

Walter was born on 28 May 1889 at Hanley, Stoke on Trent, Staffordshire, to parents Henry, a writing clerk, and Pheobe.

The 1901 census describes Walter as a machine clerk.