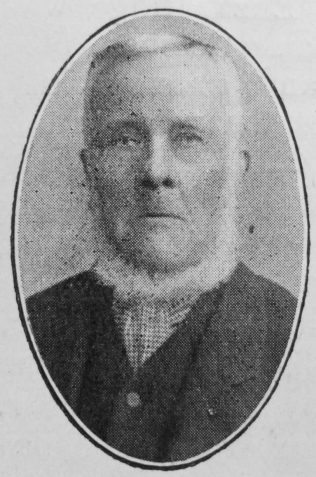 Mr. Samuel King died at Bottesford, March 16th, 1908, at the age of eighty-two years. Converted in early life he at once joined our Society in his native village. Having received a good education, and possessing good speaking abilities he was soon placed on the plan as a local preacher. In the year 1851 he was called into the ministry, but at the end of four years returned home and entered into business. As a local preacher he gave to this department of God’s service the best of his ability in thoughtful preparation and earnest delivery. For many years he filled the offices of circuit steward, society steward and class leader with great faithfulness and efficiency. In doctrine and polity he was strictly Methodistic, but was tolerant toward those who held other views.

For sixty years he was only once absent from the annual camp meeting. He held strong views on temperance and on politics, and was fearless in the advocacy of what he believed right. A true Nonconformist of the militant type, he was always ready to demand and defend freedom of conscience in all educational and religious matters. For many years he was a member of the School Education Committee and of the Parish Council. In 1903 he was elected a member of the Deed Poll, a position highly esteemed by him.

Bro. King possessed a magnificent physique and was never ill until the last week of his life. A week before his death he was present at the services and took part in the after meeting with accustomed fervency. On the Tuesday following acute bronchitis rapidly developed, and in a few days he passed away in the midst of his children. As he lived so he died calmly, fearlessly trusting in Jesus Christ. His wife had predeceased him by three years. He was laid to rest in the village churchyard in the midst of his fathers, in the presence of a great company of friends and relations. Revs. Canon Jackson, Rector, and J. French officiated.

On the following Sunday a memorial service was held in our church. The circuit’s loss is great by the removal of Bro. King, but the influence of his life will be present for many years to come. May his children meet him again in the City of God in which there will come no more night.

He married Hannah Sisson (1831-1904) in the summer of 1856 at Bottesford. Census returns identify four children.