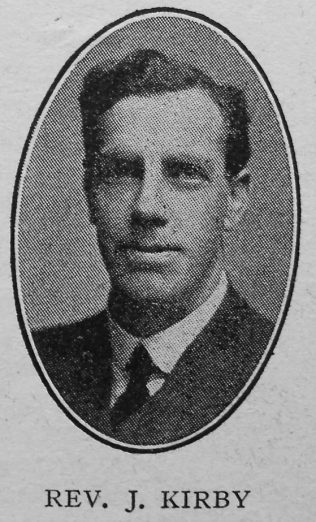 Transcription of obituary published in the Primitive Methodist Magazine by J.J.R.

James Kirby was born at Overseal in Church Gresley Circuit in 1882. His father rendered magnificent service as a local preacher for many years, and James was in every way a worthy son. A thoughtful boy in Sunday School days, he early became a member of the choir and a local preacher. He began as a preacher by going out “on Note ” with Mr. Moses Bourne. It was not until he had married that the call came to enter the ministry. So sure was he that God was leading him to give his life entirely to this high vocation, that he sold his home and property in order to emigrate to America where he entered Mount Zion College, Ohio, to receive training for what he was so certain was his life work.

After spending two years at College he became Pastor of Hampden Methodist Episcopal Church. At the end of three years ministry he came home to England intending to return to his work in the United States, and had actually booked his return passage. But the effect of the War on the Homeland and the need of the Churches led him to take up the work here. After a short term at Aldershot he served for three years at Teignmouth, Devon, as lay agent.

He was admitted into the ministry in 1918, and served successfully at Weston-super-Mare, Nottingham II, and Leicester II. On each of these stations he was much beloved. He was so sincere and gentle and unselfish. Kindness seemed natural to him. No mean word, or unchivalrous action could ever be imagined of James Kirby.  He was an effective preacher, and he lived what he preached. His life had its sorrows, but these only mellowed him and gave him new equipment to help others in sorrow. None could come into contact with our friend without feeling better for it.

The end came with tragic suddenness. On the morning of January 22nd he had not been very well, but kept his appointment in the evening at Dunton Bassett missionary meeting. To the friends assembled he seemed his usual self, and when the meeting concluded he cheerily rode off into the darkness on his way home. But he did not arrive. Towards midnight his wife and two or three others set out from Cosby to seek him. They found his body on the roadside but “he was not for God had taken him.” There were no indications of an accident. The cycle had been carefully laid down, and the lamp was burning when it was discovered. Apparently he had not felt well and had dismounted, got down upon one knee, and quickly passed away to the Homeland. It was a terrible shock to his dear ones. But in our hearts we knew that all was well. His lamp is still burning. James Kirby lives, and his influence will abide for ever.

All hearts go out towards Mrs. Kirby, James and Lilian. They will cherish the memory of a good and gracious life. May the God of all comfort be very real to them.