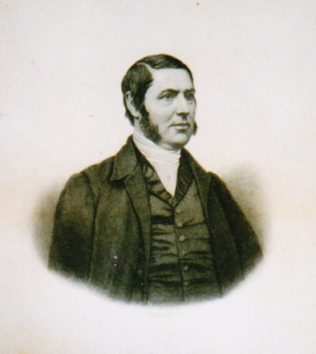 In his early life, Robert Key laboured as a coal porter in Yarmouth.  The work was backbreaking, filthy and brutalising and Key earned a reputation as a gambler, a drunkard and a violent fighter.

Hearing a group of Primitive Methodists singing as he passed in the street one day, he was attracted to their meetings and his interest aroused.  He underwent a conversion experience on Easter Sunday 1825 and joined the society.

Within two years he had become a Local Preacher although his lack of education meant that at first could barely string two sentences together.  His preaching showed promise, however, and he was invited by the Fakenham Circuit in 1828 to work as a Hired Local Preacher.  He moved on to North Walsham and attracted people to his services, but circuit officials felt him to be too uncouth to be a travelling preacher.  Key remained adamant about his mission and reluctantly he was allowed to go to mid Norfolk to carve out a new circuit.  No Primitive Methodist activity had yet been seen there and the people were, as Key said, ‘exceedingly ignorant and proverbially wicked.’ [2]

He began to preach in the villages near East Dereham and crowds flocked to hear him.  Soon violence erupted and Key was often attacked, sometimes by labourers, sometimes by others who were supported by the magistrates.  At Reepham ‘a stone was thrown at me which broke my head; the said missile…was thrown by the hand of the clerk of the parish church.’ [3]   At Watton, Key was repeatedly knocked to the ground, the vicar encouraging the mob from behind the scenes.  Yet support grew and societies were formed.  The first chapel built by Key was at Cawston where he dug the foundations and sawed the wood himself.

Key found a ruined Wesleyan chapel at Mattishall.  He repaired it and immediately it was filled to capacity.

The Keys lived in penury on an income far lower than the poorest paid agricultural labourer and only survived with the help of friends.  When he was required to attend a District Meeting in London, Key walked the whole way in both directions.

His work at camp meetings was legendary – preaching and praying all day and until late at night.  People streamed in from miles around.  Noticeable improvements in behaviour were seen.  Sheep stealing halted, gambling and drunkenness declined and crime was reduced.

Key missioned Newmarket and Hadleigh.  He walked so many miles that the blood oozed above his shoes and he was forced to tear off the bottoms of his trousers to bind his bleeding feet.  He also worked in Cambridge, Ipswich, Stowmarket, Lynn, Downham Market, Fakenham, Yarmouth and Norwich, adding 2,257 people to the Primitive Methodist societies.

Stationed in Norwich for the first time in 1849, he supervised the building of a chapel on Dereham Road.  By 1862 when he was again in Norwich, it had become far too small and with his accustomed energy, Key raised money for the new building as well as contributing generously from his own pocket.  He made it his base in the city between his nation-wide lecture tours and preaching engagements.

In 1866 he published an account of his early work, opposition, obstacles and successes, called The Gospel Amongst the Masses. His book records the first Primitive Methodist missions in many places in East Anglia.

Robert Key was a brilliant preacher; ‘he moved the excited crowd as the hurricane does the trees of the forest.  He was like the dashing torrent which sweeps with the force and thundering rush of an avalanche from the mountain crags and steeps, impetuous and irresistible.’ [4]

When congregations were told of his death on 2 September 1876, they wept openly.  Hundreds attended his funeral at Dereham Road chapel and his burial at Norwich City cemetery.

[1] This was how Key described himself in these years.