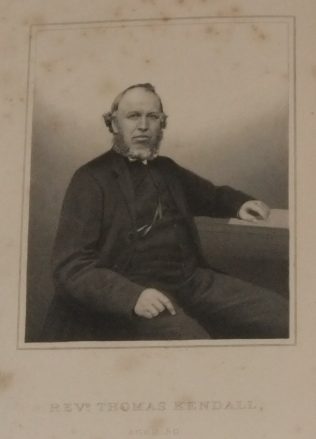 After leaving school, he worked as a groom on a farm .

Kendall writes of his uncle; ‘ Thomas Kendall was converted at Gainsborough, and began and ended his thirty-four years’ ministry in his native circuit. By his genial, kindly disposition and pastoral diligence he endeared himself to his people. His soul was full of music so that he sang as well as preached that gospel which he illustrated by his life.’

His obituary records; ‘In the pulpit he is solemn, earnest and impressive; he cracks no jokes, utters no vulgar witticisms; he deals in no idle speculations; he attempts no fine spun theories; he belongs to the old school; he is a plain Primitive Methodist preacher; he has in his earthen vessel a few gospel truths, which he deals out in language chaste, with evident intention to impress his hearers and make them better; he believes and therefore he speaks.’

There was a net increase of 600 on his stations.