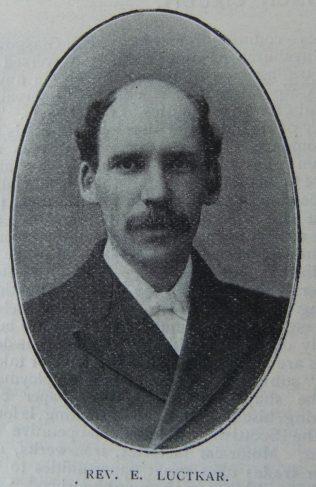 Edward Luctkar was born on 5 March 1875 in the mining community at Kiveton Park, Yorkshire. In 1891 the family were living in a miner’s cottage at 219 New Rows, and both Edward, aged 16, and his father Carl were working as coal miners.

The family name is both unusual and intriguing. It is so unusual that it appears to be unique. All people with that surname today are descended from Carl and Annie Luctkar (nee Guest), who married at Southey, Yorkshire, in 1866.  Carl was born in the West Indies, but was a British Subject, and a sailor before he settled in Yorkshire, finding work first as a labourer, and then as a miner. There is speculation that the family may have come from Norway, but there is no evidence for this. Far from home and unable to write his name, it seems that the name became what someone heard and wrote down. Its origins may never be known.

A Primitive Methodist Church was built at Kiveton Park in the 1880s. The chapel stood in the middle of the village, and became hugely important in the life of the whole community. Not only was it the centre of people’s religious lives, but it provided a rich programme of social and cultural experiences. It was demolished in the 1980s.

It is not known if Carl and Annie were members of the Primitive Methodist society at Kiveton Park, but it was here that Edward was converted and received the call to preach. His gifts were recognised, and he was encouraged to become a Primitive Methodist Minister. At that time students were trained at Hartley College in Manchester, but there is no record that Edward received any training.

In 1897 he was sent out to his first appointment as a Primitive Methodist Minister in the Leeds VI Circuit. The following year he was moved to Scotland, a long way from home, where he was to stay for three years. In the 1901 census he can be found lodging with a family in Tranent, in East Lothian.  Later that year he was married, to Prudence Mary Pomfret. She came from Preston, so it is not clear how they met.

In 1901, the newly married couple moved to Quinton, near Birmingham. It was here, in 1903, that Edward was responsible for building a Primitive Methodist Sunday School at Court Oak, in Harborne, at a cost of £50. There were plans to build a church as well, but unfortunately they ran out of money.

In 1908 he made a momentous decision.  On 1 January 1909, Edward, Prudence and their baby daughter Marion, who was just a year old, set sail to start a new life in Canada, on board a ship from Liverpool to New York. Edward gave his occupation as ‘clergyman’.  Was he sent by the Primitive Methodist Conference to serve as a Primitive Methodist Minister in Canada?  There is no further record of him in the Minute of Conference, and he does not appear in the lists of PM ministers in Canada.  In 1882-1883, a Primitive Methodist colony was established near Pheasant Forks, Saskatchewan, by ‘English preachers’.  Edward may have answered an advertisement in a newspaper for a minister to go out and help the new settlers, as he went to Saskatchewan.

Shaunavon was established in 1913 along the Canadian Pacific Railway, and its pure and abundant water supply drew over 700 settlers in less than a year, earning it the nickname ‘Boomtown’. In 1913 Edward and Prudence are listed among the very first settlers in Shaunavon, Saskatchewan. It was a coal mining area, so possibly there were links with his home town. It was here that Edward ministered for many years.

Travels between Canada and England

In 1933 Edward and Prudence sailed from Montreal to Liverpool to visit her family in Preston. They may have returned because Prudence was ill, as she died the following year.  Edward returned to Canada in 1935. Now aged 60, his occupation was still described as ‘Minister’, but in 1936, on a visit to England he was ‘retired’.  It was in England in 1939, that he married his second wife, Mary Gertrude Flower, who was 16 years his junior. She returned with him to Canada, but by 1958 they were once more back in England.  Edward died at Broadstone, Dorset, on 9 January 1966, at the age of 91.  Records suggest that his body was taken back to Canada, and buried in Ontario.