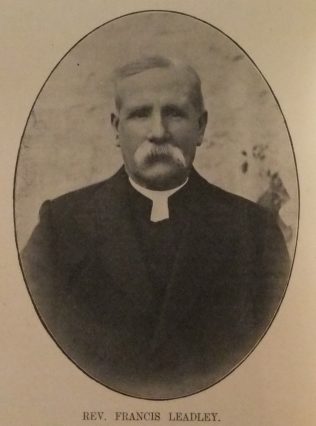 Francis was born in 1846 at Driffield, Yorkshire to parents Joseph James Leadley and Leah Leadbeater.  His parents were both Primitive Methodists. Joseph worked as a shoemaker, a trade that Francis also followed before entering the ministry.

When young, Francis was introduced into the ‘atmosphere’ of Sunday School and Church life. He made a public commitment to Christ in 1863. Francis began to preach at the age of eighteen.

His obituary records that Francis had a lofty conception of the ministerial calling, and studied to show himself approved of God. He was well read in theological and puritan literature, and his preaching was always abreast of the times. Revivals of religion broke out on several of his circuits, especially at Stockport, where many souls were added to the Church.