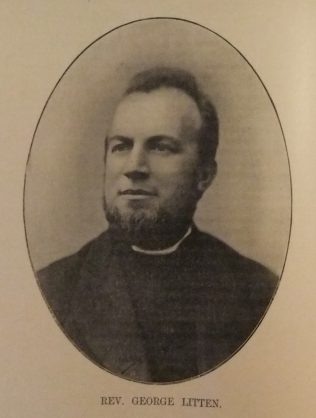 George was born on 17 June 1848 at Redruth, Cornwall to parents John and Mary. His father was a cabinet maker.

George was converted under the ministry of Rev. Joseph Best and from the time of his conversion he took a keen interest in the work of the Church. On successfully passing his examination in 1868 he entered the Sunderland Theological Institute.

His obituary records that George had high ideals and endeavoured to realise them. He always sought to raise the churches under his charge to a higher spiritual level. He was a true pastor; his genial personality, the charm of his goodness, his real sympathy and compassionate heart, made him ever welcome in the home.

His pulpit messages were charged with spiritual power. He not only prepared his sermons, but prepared himself by much prayer and waiting on God. Preaching was a passion with him.

When a matter of principle was at stake, George showed no weakness or vacillitation. This was demonstrated by the attitude he took towards the Education Act of 1902. He refused to bribe his conscience by paying for sectarian education, and as a result, was imprisoned on three occasions in Winchester Gaol. He also served two terms in Brixton gaol for conscience sake.

Whilst at Salisbury, George served a year as president of the Salisbury and District Free Church Council.