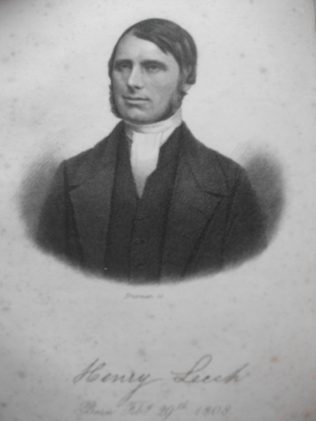 Henry was born on 20 February 1808 at Ely, Cambridgeshire to parents Richard and Ellen. He was baptised on 8 Mar 1808 at Wisbech, Cambridgeshire. Henry was orphaned at a young age and was fostered by an aunt. He was a class leader in the Wesleyan Methodists before he was 21 years old. His Wesleyan membership was suspended in 1828 because he attened a camp meeting. He joined with the Primitive Methodists at Wednesbury and became a local preacher.

Petty records that membership in the Birmingham circuit increased significantly during the period when Henry was superintendent, from 1846 to 1850. Kendall reports it was not until 1851, that the first small Connexional Chapel was built in Birmingham.  This was New John Street, built in the last year of Henry Leech’s useful term in the Birmingham Circuit.

Christian Conversation as a Means of Grace by Henry Leech can be found in the Primitive Methodist Magazine, 1851.

Wesley’s views of the holy scriptures : being the only Christian guide to holiness and heaven, stated in a lecture by Henry Leech , Published 1864