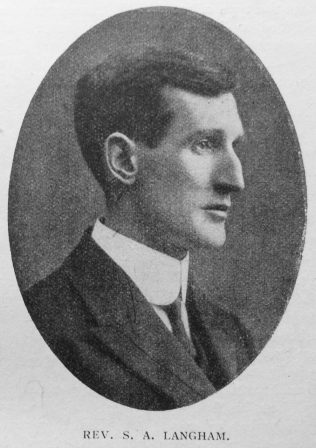 A transcription of obituary published in the Primitive Methodist Magazine by Rev E.H. Pittwood is attached. He writes: “Samuel Langham was the type of man our ministry can ill afford to lose—intellectually keen, modest, generous-hearted and absolutely faithful to his charge. He had an infectious gaiety which won him friends wherever he went. But no one had a more intimate sympathy with the needs and sorrows of those to whom he was called to minister. He spared himself no trouble to be of assistance to those who needed his help; consequently the news of his death came as a great shock to a large circle of friends, who felt the passing as a personal loss. “

Samuel was born on 25 May 1880 at Reading, Berkshire, to parents James Peck Langham, a PM minister, and Betsy Lawrence.

Before entering the ministry Samuel was a student teacher. He gave up a scholarship to Liverpool University in order to attend Hartley College. Before attending college he spent a few months as a hired local preacher in the Crewe circuit.

He married Mary Boulton (1885-1976) in the summer of 1915 at Pontypool, Monmouthshire. Birth records identify two children.