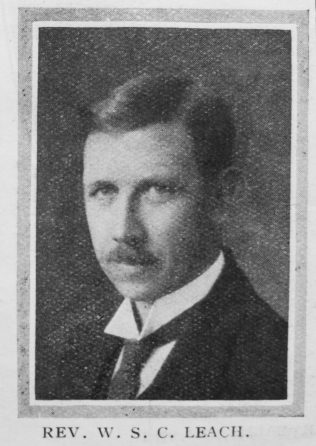 WILFRID SAMUEL CHAPMAN LEACH: born in 1882. He was a son of the manse, entered the ministry in 1905, and was trained in Hartley College. Afterwards he served in the following circuits: Bloxwich and Cannock, Coalville, Clay Cross, Tarporley, Burton-on-Trent, Leicester II, Derby I, Hull (Holderness Road), Sileby, Wembley, and Worksop. He retired in 1951 and went to live at Manor Court, Barrow-on-Trent.

He was a man of fine presence and with a personality that combined both strength and gentleness. He was a powerful preacher and original thinker, and his sermons sprang from passionate conviction, hard reading, and careful preparation. He was a true democrat and the champion of all good causes. He was an excellent business man and showed much tact, patience, and wisdom in all his management of Church affairs.

For some years before Union he was on the General Sunday School Committee and served for five years as Teacher Training Secretary.

The call came suddenly on 13th December 1953, in the seventy-first year of his age and the forty-ninth of his ministry. He leaves behind him the memory of a courteous, friendly, devoted, and efficient servant of God.

Wilfred was born on 16 January 1882 at Dunstable, Bedfordshire, to parents John Leach, a PM minister, and Annie Eliza Chapman.

Before entering the ministry, Wilfred worked as a commercial clerk (1901).

Wilfred died on 13 December 1953 at Barrow upon Trent, Derbyshire.