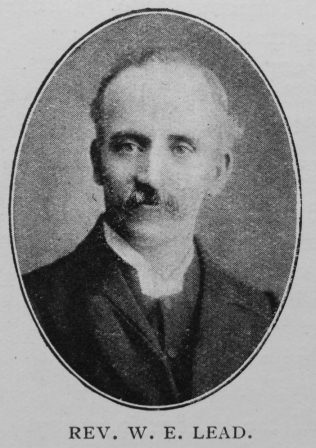 WILLIAM E. LEAD: born in Wolverhampton in 1868. After a period at Hartley College he entered the Primitive Methodist Ministry in 1893. He fulfilled his calling faithfully in all his circuits, and after completing forty-one years in the active ministry still continued, for three years after his retirement, to serve at Waltham, Grimsby.

He was an omnivorous reader, and even at the end of his life was planning fresh studies. Poetry gave him much pleasure, and he was a keen student of Browning. In his sermons he was able to present difficult subjects in such a way as to be easily grasped. He was especially interested in the training of preachers, and guided and helped many in their formative years. In disposition he was friendly and genial, a man full of understanding and sympathy, who was often found in the homes of his people.

Towards the end he was stricken down by a grievous affliction, which he bore with fortitude. He passed away at Meliden, Prestatyn, on November 10, 1937.

William was born in the summer of 1868 at Wolverhampton, Staffordshire, to parents John Frederick Lead, a draper (1871), and Mary Naylor.

He married Emily Mona Annie Drought (1872-1948) in the summer of 1897 at Widnes, Lancashire. Census returns identify two of three children.

Note: the picture was taken from an article about PM Poets published in the PM Magazine 1911