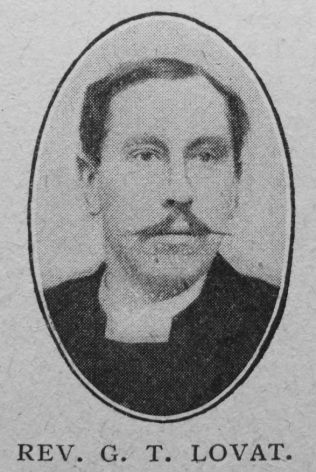 In the passing of the Rev. G. T. Lovat a beautiful life and a potent and gracious ministry were interrupted on earth, to be resumed and continued in some one of those mansions of light of which Jesus spoke to His disciples.

He was born at Alston, in Cumberland, on the 13th March, 1866; whither the family had come to reside a short while before. The parents were Presbyterians, but there being no church of that body at Alston, they cast in their lot with our people. The father died when George was six years old, but his mother was a pious woman, and wrought hard to bring up her children in the fear and knowledge of God. Our brother was converted at the age of sixteen in a mission conducted by the Rev. Thomas Champness, and became a member of the Church, and secretary of the Sunday school.

His gifts and graces were recognised, and he was soon called upon to exercise them in the office of a local preacher. About that time he came under the influence of the late Rev. John Sharp, formerly of Australia, who helped and encouraged him. During the ministry of the late Rev. Robert Gillender, at Alston, he was recommended for the ministry when he was twenty-two years of age.

A year was spent in the Manchester College, then under the Principalship of the late Rev. James Macpherson; and in July, 1889, he was appointed to Chipping Norton Circuit as colleague of the writer. Then began an intimacy which quickly ripened into a friendship that only death has interrupted. The Chipping Norton Circuit then comprised twenty churches, spread over an area twenty-seven miles by sixteen. It proved a stiff and stern test for one who was not robust even in those youthful years. Many of the people were very poor, but kind and generous and cheerful; and out of a weekly wage of ten or twelve shillings, they provided for us hospitality that seemed like a sacrament. Those two years of hardship, toil and success, left a rosy after-glow of gratitude, which has not faded away.

His third year was spent in the Hungerford Circuit, and the fourth at Sheerness. The Conference of 1893 stationed him to superintend the Wigton Circuit, Cumberland. There he began to display those gifts of initiative, organisation, and making the best of a difficult situation which distinguished him. A new church and manse—a fine suite of buildings—were erected at Aspatria, and the residence of the minister transferred thereto. The condition of the circuit was greatly improved during his six years’ ministry. His next charge was Oldham IV., two years. From thence he removed to Marple, where he spent five years; then Ellesmere Port, three years; Liverpool V. (Aintree), six years; Ellesmere (Salop) three years ; and Chalfont St. Giles, where on account of serious heart-trouble he was compelled to relinquish his work after a few weeks of suffering. He returned to Ellesmere, hoping rest might restore his strength. This was not to be. He loved life, and his work; but God was calling him to the higher service, and after a short and painful struggle on May 26th, he passed from the bondage of the flesh into the freedom of the spirit life.

On Thursday, May 29th, his remains were laid beside those of his mother in the Ellesmere Cemetery. The minister, the Rev. J.E. Ogden, officiated, and the Revs. F.E. Thistlethwaite, W. Chapman, G. Osborne, F.A. Mayes and J. Bradley took part. Many members and friends of the town and circuit gathered to pay a last tribute of respect and of sympathy with the sorrowing sister. To summarise our friend’s gifts as preacher, pastor and superintendent is not easy in a few words. He was equally successful in each department of his ministerial duty. As a preacher he excelled. He built up his churches in faith and knowledge of Jesus Christ, and we are sure those who were favoured with his uplifting ministry will cherish his memory, and the power of his teaching will not fade away.

George was born on 13 March 1866 at Alston, Cumberland, to parents John Lovat, a farmer, and Ann Stephenson.

Before entering the ministry, George worked as a spinner in a woollen mill (1881).