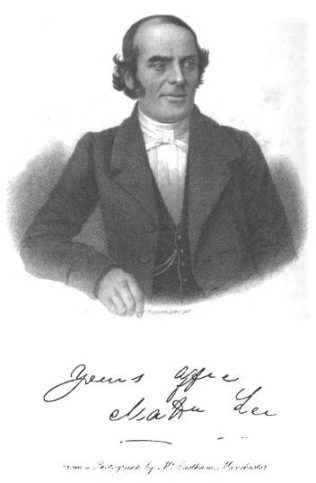 Matthew was born in 1805 at Hexham, Northumberland to parents Matthew Lee and Jane Hedley. He was baptised on 3 November 1805 at Hexham.

Matthew was converted at the age of 17 through the open-air preaching of Mr Summers. Despite opposition from his parents, he joined with the Primitives and soon began to preach. He started to travel in 1827 being sent to Cumberland. Following his marriage, domestic reasons required him to leave the itineracy and he opened a business at Corbridge. However, after much time spent in prayer, he decided to continue to be an itinerant. He was sent by the 1831 conference to Burnley, where over a three year period he was able to strengthen the society.

Matthew’s obituary records that he was well read. Whilst he appears to have not been a brilliant preacher, his sermons were ‘richly fraught with plain Gospel truth’. His prayer in the context of worship was also well received. The writer of his obituary says ‘he sometimes erred in matters of judgement and occasionally displayed a hastiness of temper’.

Matthew was a conscientious teetotaller.

After Matthew’s death, Mary became a matron housekeeper at a hospital at North Meols, Southport.