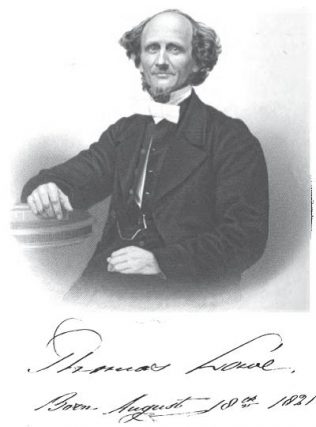 Thomas was born on 18 August 1822 in Liverpool. His father was a Scottish Presbyterian. Thomas was converted aged 12 at an open air service. He became a well-known ‘boy preacher’ and aged only 15 began his ministry with the Huddersfield circuit.

Kendall writes that his ministry extended to the unprecedented length of fifty-eight years. He had a fervent, optimistic temperament and a highly rhetorical style. His enthusiastic, untiring advocacy of the African mission, however, is that feature in his character and ministry with which we are now most concerned. He was ‘gone’ on Africa. A large map of the continent hung on the walls of his study. The shelves of his library bristled with books on Africa. In whatever company he found himself the conversation was sure to turn on Africa.

His obituary records that when in his prime, he was one of the most popular ministers in the connexion and in great request for ‘specials’ all over the country.

The good intent, or, The heaven-bound ship a characteristic sketch of Primitive Methodism, 1860

The Christian Speaker: Or, Plain and Practical Sketches for the Pulpit, Platform, and Pew, 1874 (with William Whitby)

Champion of East Anglia (257 KB Adobe Acrobat document, opens in a new window)
Transcription of an article in the Christian Messenger 1915