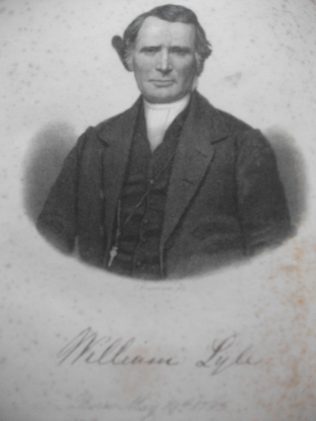 William was born on 19 May 1795 at Launcells, Stratton, Cornwall to parents John Lyle and Mary Wickett. He was baptised on 3 July 1795.

In 1833 the Hull Circuit sent Rev. Joseph Partington to assist in the further development of the work (in Canada). In the same year the same circuit sent another missionary, whose name in Canadian Methodism is as ointment poured forth—William Lyle, for many years known as Father Lyle, a name indicative of the love and reverence in which he was held. He was a man of good figure, commanding presence and an open countenance. William Clowes had met him and had been struck with his gifts and graces. He joined the Wesleyan Church when twenty-one years of age, but afterwards became a travelling preacher in the Bible Christian Church which he left on account of a trifling irregularity in relation to his marriage. After this he taught school till he became a Primitive Methodist preacher in the year 1826. The Hull Circuit sent him to London, and, after travelling in several English circuits, he was sent to Canada in 1833. He was stationed at Markham, one of the outlying appointments in the Toronto Circuit; afterwards at Churchville in 1835, and in 1837 in Etobicoke. Amidst much discouragement he laboured with success. He seemed to have but one aim—to save souls; and his heart’s desire was abundantly granted him. His last circuit was Laskay, which, under his superintendency, was blessed with an increase of one hundred members. He superannuated in 1863, and died ten years afterwards. The first words he uttered when converted, in 1816, were, “Glory! glory! glory!” and amongst his last words when dying were, “ Christ is all in all.” His was a blessed life and a triumphant death.

The 1861 census of Canada records William having married Mary in 1823.