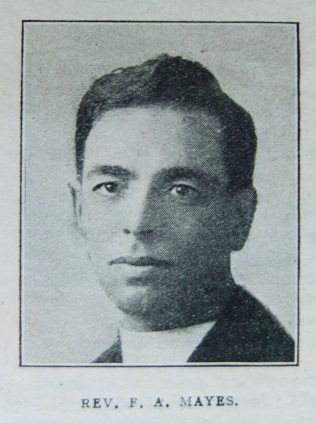 FRANK ALBERT MAYES: born in Leicester in 1888. He entered the ministry from the Catherine Street Church and after training In Hartley College began his ministry at Wolverton in 1913. There followed terms of service in Cross Keys, Pontypool, Rhosymedre, Hull, Market Rasen, Louth, Midsomer Norton, Heywood, Manchester, Doncaster and Bloxwich. Always fully aware of the privilege and responsibility of being called to the ministry he sought zealously to prepare himself for all this calling involved. He was efficient in administration, diligent in the pastoral office, yet always resisted incursions into time set apart for private bible study and prayer. A friendly and sympathetic nature helped him to exercise his greatest concern – caring for people. In every circuit God greatly used him to encourage and strengthen the faithful and bring the light of the Gospel to some who had previously walked in darkness. For forty-two years his ministry engaged all his powers and time. He retired from the full work of the ministry in 1955 and became an active supernumerary at Mountsorrel in the Loughborough Circuit. Here he soon endeared himself to the people as preacher, pastor and friend. On 9 December he conducted services both morning and evening and there was no hint of diminishing vigour; the call came suddenly, a fitting and glorious end to a truly saintly life. He died on 10 December 1962, in the seventy-fourth year of his life and the forty-ninth year of his ministry.

Frank was , to parents John Thomas Mayes and Priscilla. John was a hosiery worker.