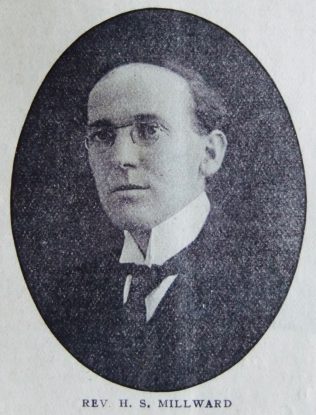 The Rev. H. S. Millward owes a great deal of the marked success that has attended his ministry to his own exertions, but he acknowledges with increasing gratitude his debt to his parents. His father, an honoured and beloved worker in our Newcastle-under-Lyme Church, (Staffs) was a man of much culture, and widely read in the poets and essayists, and he saw to it that his son should receive the best training his means could provide. This opportunity was taken hold of by the young student, who became an assistant master, and received a special prize from the hands of Sir Oliver Lodge for work done at Wedgwood Institute, Burslem. Three years at Hartley College completed the beginning of an equipment which Mr. Millward has been improving ever since.

A Preacher of The Word.

First and foremost in his conception of the work he is called to do, Mr. Millward sets the preaching of the Gospel. To this high duty he brings his best, to the enrichment of the people to whom he ministers, and who, in the spheres where he has laboured, pay grateful tribute to the inspiring quality of his messages. Southend-on-Sea, York (Monkgate), Redditch, Leominster and Currock have in turn been strengthened by his work, not only by his pastoral oversight, his attention to business, his increasing power in the pulpit, but particularly by his devotion to the young people. He has given special care to children’s addresses, and these have been a greatly enjoyed feature of his Sunday morning services everywhere.

No church has given more valuable help to outside organisations than ours, and although Mr. Millward is still youthful in the ministry he has taken his place on the roll. At Leominster he was the President of the Free Church Council, and served as Secretary of the Herefordshire Federation of Free Church Councils. On occasions he has been called upon to preach the Mayor’s sermon, and he has been an eagerly welcomed preacher and speaker in other churches and on other platforms than our own. During the later period of the war he edited a local newspaper, and is the present C.E. Secretary of his District, which sent him to Conference last year.

Mr. Millward removes to Derby Second (Kedleston Street) next year, where he and his devoted wife will find every opportunity for the full use of every gift they possess, and where we feel sure they will both enjoy increasing success.

HERBERT SYDNEY MILLWARD: born at Newcastle, Staffs, in 1885. He entered the Ministry of the Primitive Methodist Church in 1909 after training at Hartley College. His Probationary Ministry was spent at Southend, York, Redditch. In 1913 he was appointed as the Superintendent of the Leominster Circuit, and subsequently served in Cannock, Derby, Buxton, Luton (Hightown), and Norwich. He retired in 1950 and spent the remaining years of his life in Norwich. It was at the end of the First World War that he went to Cannock where many families were stricken by sorrow and distress. He not only brought to such people rich resources of strength and courage, but by his personal example and influence he led many young men to become preachers. Some of these men are still active in the life of the Church today and they remember with gratitude the careful training and wonderful inspiration they received from him. His natural friendliness and geniality made him a well-loved pastor in all his circuits. As a preacher he had a strong creative mind and had the ability to communicate to others all the beauty he saw and felt. He prepared his sermons and addresses most carefully, and one of his special gifts was the ability to talk to children. By nature he was quiet and unassuming but he was fearless and adamant when roused by what he felt to be wrong and unchristian. He was a man who never sought the limelight, but he was meticulous in the fulfilment of his circuit duties, and found little time for outside interests. The last years of his life were a gallant fight against illness but his but his deep Christian Faith never wavered and all who visited him found themselves challenged and inspired. He died on 29 March 1969, in the eighty-fifth year of his age and the sixtieth of his ministry

Herbert was born in 1885 at Newcastle under Lyme, Staffordshire, to parents Thomas George and Annie. In 1901, Thomas was a gas and rent collector.