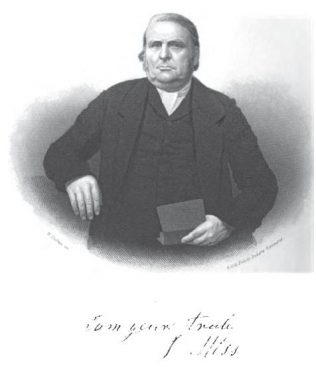 James was born in Aug 1795 Whatton, Nottinghamshire to parents Richard and Elizabeth. He was baptised on 1 September 1795 at Whatton.  Kendall records that James was ‘won’ on Easter Sunday 1816, being both convicted and converted under John Benton at Whatton. James began his ministry in 1819.

Petty records extracts of James’ journal that tell of early excursions into Birmingham from the Darlaston circuit in 1824/5. Whilst the tone of the extracts is optimistic, it wasn’t until 1828 that Birmingham was stationed for the first time as a separate circuit with one preacher.

A Correspondence Between the Rev. F. W. Faber, Formerly Rector of Elton, Huntingdonshire; But Now a Roman Catholic Priest, and Superintendent of a Monastic Establishment, at Cotton Hall, (Staffordshire;) and Mr. James Moss, Primitive Methodist Minister at Alton, in the Same County, 1847

J Petty, The History of the Primitive Methodist Connexion, 1880, p.228