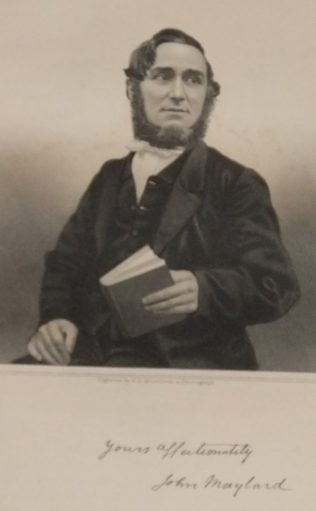 For the first 10 years of his life he lived in a poor neighbourhood. The family moved and John was introduced to Sunday School at St Peters. As a youth he had several jobs, the last being for a baker and confectioner. When that failed, he travelled to London to seek work. Down on his luck he was locked up as a vagrant. He was given some money to return home, but had a further spell in jail in Worcester.

John gave himself to God at the age of 18 but it wasn’t until he joined with the Primitive Methodists that he found peace. At once he started to preach and triggered a revival and a new PM Society in Hereford.

From Prison to Pulpit – The Life Story of Rev. John Maylard – A Pioneer of the Primitive Methodist Church and Minister of the Gospel nearly 60 years, 1896

S E Hayter, My Maylard Family The Genealogical History of an Ordinary Family, 2011, pub at www.lulu.com