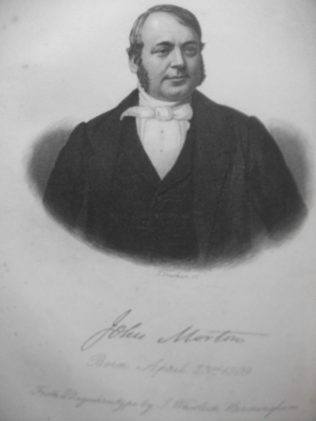 John was born 23 April 1809 at Hope, Derbyshire to parents George Morton and Hannah Middleton, the oldest of ten children. He was baptised on 7 May 1809 at Hope Parish Church, Derbyshire. George and Hannah are recognised as being among the first Primitive Methodists in Bradwell. George allowed services to be held in his barn before the first chapel was built in 1822 and opened by Hugh Bourne.

John was converted in 1821, joined the Primitives and soon became a class leader and local preacher in his teens.

Kendal writes; ‘ Primitive Methodism did not win a place and position in Hereford without a struggle. Indeed, for a number of years, it would be truer to say that it had to fight for its existence, rather than that it flourished. It was eighteen years before Hereford became the head of a circuit. The society, numerically feeble, had to do its best to grow in a niggardly soil and in the cold shade of opposition, such as often rests on Dissent in cathedral cities. During this time there was much adverse sentiment to face, and frequently the roughs took advantage of it to annoy the worshippers at their camp meetings, and even in their own rented room in Union Street. But, at last, persecution was undone by its own act, and better times came. On August 26th, 1833, when Mr. J. Morton, the superintendent, was holding an open-air service at the Friars’, in the neighbourhood of Quaker Lane, he was arrested by the direct orders of an irascible magistrate. Mr. E. Pritchard, attorney and Congregationalist, generously undertook to plead Mr. Morgan’s cause before the mayor and magistrates on the following day; while Mr. Morgan, by his firm though respectful attitude made a powerful impression on the crowded court. Messrs. Pritchard and Yapp stood bail, but when the Sessions came no “true bill” was found against the street-preacher ; and, after this, street preachings were un-molested, and public sentiment became much more favourable. The Circuit Report of 1836 speaks of the prosperity of Hereford. “The room is now generally crowded ; there are now eighty members, whereas in 1829 there had been but twenty-two.” Persecution is spoken of in the past tense: “At Hereford our people have been persecuted, and on various occasions life has been in danger. Several attempts have been made to obtain redress but we could not succeed, because many of the higher powers were utterly opposed to our cause. But now some of the respectable inhabitants are favourable towards us, and use their authority for our benefit, and some of our most violent persecutors are gone the way of all flesh, some are transported, and some converted to God.” In June, 1838, a chapel was opened in the city, and in 1840 Hereford became the head of a new circuit with two travelling preachers and 220 members. The present beautiful church in St. Owen’s Street was erected in 1880 at a cost of £3561, and yet within twelve months after its opening the building was out of debt. It has seatage for six hundred people, and the schoolroom behind has accommodation for three hundred scholars.’

J Petty, The History of the Primitive Methodist Connexion, 1880, p369