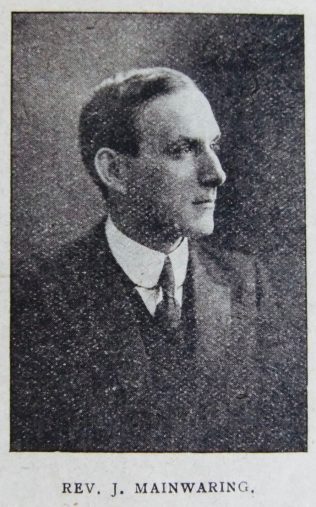 The Rev. John Mainwaring is one of the most gifted of our younger ministers. He has a striking personality, fine preaching gifts, he is a genuine musician, and full of personal magnetism. We have been on the circuits where he has laboured in other years and have rejoiced in the abiding impression his personality and ministry have made. His home circuit was Oakengates, Salop, where his mother was the oldest scholar and teacher in the Sunday-school. His father for many years was a local preacher and class leader. He commenced to speak in C.E. meetings at Ebbw Vale, and became a local preacher on the Ebbw Vale Circuit. It was during the superintendency of the late Rev. James Tristram that he was recommended for the ministry. In 1907, he entered Hartley College and spent three happy and fruitful years there.

His probation was spent on the Stoke Newington Circuit and an exceedingly happy and successful time he had. He was surrounded by loyal and faithful officials. The Stoke Newington Circuit has long been famed for the wealth of its official life, and upon these vigorous and progressive men Mr. Mainwaring made a deep impression, and, to this day they are friends. From 1914-17, he superintended the Walsall Circuit, and here also on our visits we found that he had made the same impression. The spell of his personality was felt everywhere. He is now on the Manchester lV, Circuit, and in his second year there.

He was one of the many ministers who served as Chaplains during the war. He has quite a record in his honour. For nearly two years he was in Mesopotamia, and for some months acted as S.C.F. to the United Army Board in the Mesopotamian Expeditionary Force. He had the honour of being  mentioned in despatches and was awarded the military O.B.E. He was decorated at Buckingham Palace by His Majesty in March, 1920. We feel sure that Mr. Mainwaring will have a most successful career in our Church. He possesses the gifts that will win him friendship everywhere, and we know that he is whole-heartedly enthusiastic in its service.

JOHN MAINWARING, O.B.E.: born in 1883 at Oakengates. Without exaggeration it can be said that, in every way, he was a good minister of Jesus Christ and of the Methodist Church. No man was more dearly loved by his ministerial colleagues. His home church was Oakengates in the Wolverhampton and Shrewsbury District, and to the end he loved and was loved by that church. After training at Hartley College, he began his ministry at Stoke Newington, remaining four years in his first charge. Afterwards he served in the following circuits: Walsall, chaplain to His Majesty’s Forces, Manchester IV, Camden Town, Stoke Newington, Harrow, Walsall, and Kidderminster and Stourport, where at the time of his death he was in his ninth year as superintendent. The length of his stay in circuits, and the fact that he returned to two of them for second terms, are the best indication of the service he rendered and the love he inspired. He was a great evangelist and brought many hundreds of people to the point of conversion. For five years ha was treasurer of the Primitive Methodist Itinerant Preachers Friendly Society and director of the Chapel Aid Association. He rendered outstanding service as a chaplain in the first world war, and was awarded the O.B.E. special work in Mesopotamia. During the second world war he joined his chairman, the Rev. Aaron Smith, in visiting out-of-the-way country churches and conducting services. He had a fine tenor voice, and many a congregation was lifted and inspired by his rendering of Gospel solos. No one who heard him will ever forget his rendering of a hymn with the simple refrain ‘Jesus is real to me’. Because Jesus was real to him he could make Him real to others. He faced several long and serious illnesses, and the loss of his greatly loved and loyal wife, with faith and courage. He answered the Roll Call on 31st January 1955, in the seventy-second year of his life and the forty-fifth of his ministry; and he did so without fear, because while the Roll was being compiled he was doing his duty and faithfully serving his Lord.

John was born in 1883 at Oakengates, Shropshire, to parents Ferdinand and Eliza. Ferdinand was an ironworker.

John married Minnie Embrey (1881-1947) in the spring of 1916 in the Atcham Registration District, Shropshire.