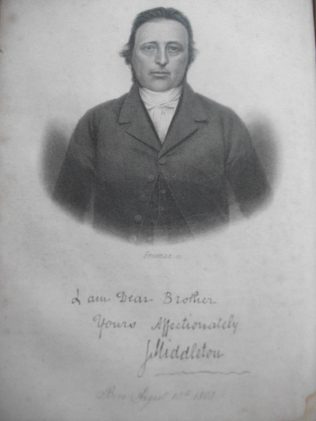 Joseph was born on 10 August 1805 at Smalldale, nr Bradwell, Derbyshire to parents Robert and Clarissa. He was baptised at Hope, Derbyshire on 25 August 1805.

Kendall writes about Bradwell; ‘The first services were held in the house of George Morton, who became the first circuit steward ; and a chapel was opened in 1822 by Hugh Bourne. This we learn on the authority of Joseph Middleton, who tells us that, from the time of the Primitive Methodists coming to Bradwell, he had generally attended their meetings, and in this same year, when a youth of seventeen, joined the society. He soon after entered the ranks of the ministry, and was followed by his brother, the present governor of Bourne College. Joseph Hibbs, John Hallam and John Morton, were also sent forth from this circuit.’

Wherever he went he was highly esteemed by his bretheren in the ministry, as well as by the members of the churches. His sermons were generally plain, forcible, scriptural, and well arranged; showing that he carefully prepared and thought out his discourses before appearing before his congregations.

As a pastor he was tender hearted and watchful, endeavouring to feed the flock with the utmost diligence.