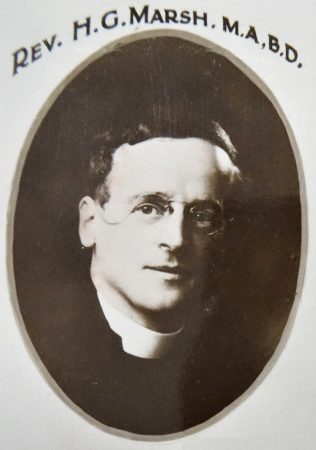 HERBERT GEORGE MARSH: born in Cambridge on 17th August 1889. He was known in the city as a ‘castle-ender’ because he came from the poorer part of Cambridge. At the age of four he taught himself to read and was often found hiding in the attic reading his deceased father’s books. His mother, although very poor with five children to feed and educate, refused to allow them to go into the workhouse. With his mother’s encouragement and his own brilliance and determination, Herbert won a scholarship to the Perse School and then won an Exhibition to St Catharine’s College, Cambridge. Whilst at the university he received his call to enter the ministry.

He trained at Hartley College, Manchester, for the the Primitive Methodist ministry. In 1928 he married Beryl Isabel Coombs who fully supported him and shared his caring, thoughtful and happy ministry. Although he was nominated to be Principal of Hartley Victoria College he withdrew so that his friend Rev Henry Meecham could be appointed. In 1940 he presented a thesis to Manchester University entitled “The Origin and Significance of the New Testament Baptism”, which earned him a Doctor of Divinity degree. When this thesis was published he acknowledged the great debt he owed to his mother by dedicating it ‘To the memory of my Mother who brought me in childhood to receive the Sacrament of Baptism and taught me by her life its true significance’.

In his early ministry he was sent to be minister of his home church in Cambridge. He continued his gracious and challenging ministry as a Supernumerary in Kelsall and then for thirty-two years in Rhos on Sea. He had a clear enquiring mind and always gave lucid and thought-provoking sermons. He kept abreast of modern theological thinking by reading the latest books until he was 100. He was a very self-disciplined man rising at 6am even in his retirement for his quiet time and personal devotions.

At the time of his death on Ascension Day he was the oldest and longest serving Methodist minister. He died on 9th May 1991 in the one hundred and second year of his age and the seventy-ninth year of his ministry.