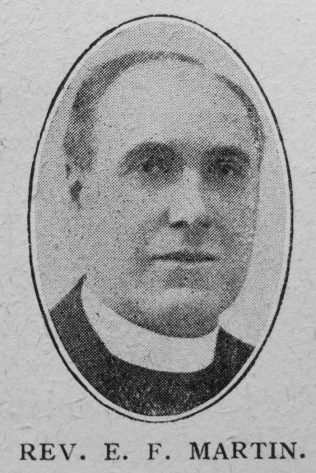 Transcription of obituary published in the Primitive Methodist Magazine by E.B. Storr

In the passing of the Rev. E.F. Martin our church suffered a tragic loss. He was not only an excellent minister, with unusual if not brilliant gifts, whose energy was entirely devoted to the tasks of his ministry. He was also—what is rarer and more precious—a man of exceptionally fine and beautiful spirit, whose natural nobleness had been refined by trial and suffering. Deeply spiritual, intensely sympathetic and unselfish, stedfast in his adherence to principle, he made himself a permanent shrine in the hearts of those who knew him, where his memory will ever be revered and loved.

Born at Sileby, in Leicestershire, in 1881, he came early into the fellowships and service of the Church, commencing to preach at the age of sixteen. Before going to college he served as hired local preacher on the Cross Keys and Idle and Calverley Circuits. His probation was spent on the Workington Circuit under the superintendency of the Rev. Fred Hopkins, with whom he formed a close and warm friendship. His subsequent circuits were Lichfield, Yarmouth I, Norwich II, Grimsby II and Middlesbrough I. He was sent by the Conference to Norwich to fill a vacancy caused by the removal of the Rev. J.H. Rose to Cambridge, and he faced a difficult and delicate situation there with great courage and tact. This was his only superintendency, though he was well fitted to bear the responsibilities of that office, having the quality of initiative and knowing how to manage men.

Mr. Martin was a poet of no mean order, and his literary work will be familiar to readers of the “P.M. Leader” and the Connexional magazines. He had a genius for talking to children, and his Sunday morning addresses to them were always charming. The pastoral side of his work was never neglected, and in the homes of the people—especially in cases of sickness and sorrow—his presence was a benediction.

His death, which took place at North Ormesby, Middlesbrough, on December 5th, 1924, after a painful and perplexing illness of only five weeks, came as a great shock to his many friends. His body was conveyed to his native village for interment. A service was held in the North Ormesby Church at an early hour on Sunday morning, and was attended by several of the Free Church ministers of the town and of our ministers from contiguous circuits. The funeral at Sileby was conducted by the Rev. P.M. Richardson, a close personal friend, and a warm tribute was paid to him by the writer, who had been his friend for several years and his colleague and superintendent for a few months.

Mrs. Martin is also a native of Sileby, and they had known each other all their lives. They were married in 1912. Two daughters along with her are left to face life without his strong and tender presence.

Ernest was born in the summer of 1881 at Sileby, Leicestershire, to parents Frederick Martin and Jane Marriot.

Before entering the ministry Ernest worked as a shoe riveter (1901).

He married Alice Teagle (1880-1953) in the summer of 1912 in the Barrow upon Soar registration District, Leicestershire. Birth records identify two children.