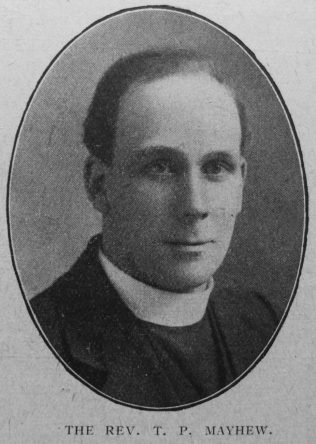 THOMAS PEABODY MAYHEW: born in Wellingborough in 1891; entered the Ministry in 1916 from Hartley College. He began his work at Clapton, East End Mission, and subsequently served in Sudbury (Suffolk), Melton Mowbray, Lichfield, Loughborough, Coventry, Bingley, Hasbury, Wolverton, and finally in the Harpenden Circuit as an active supernumerary.

He was blessed with varied and attractive gifts, and all were given freely. A man of good mind, and well read, he was foremost an evangelist, and bent all his energies to winning men for Christ. At this he was singularly effective. He preached well, and was heard gladly. Young men, especially his Probationers, were his concern, and he was able to bring forward some who became preachers. He achieved much because he was methodical, but he was no lover of law for law’s sake. He was a true shepherd of men, with a shepherd’s wisdom, patience. He judged his success not by anything he had done, but by what Christ had been able to do in anyone in whom he was interested. His character was gentle and very strong.

He suffered for years great pain, and tiring inconvenience, but he did not even murmur. As his pain increased and weakness overcame him in the midst of his work, it was apparent that his triumph over it was complete. There was something of light and glory in him which an easier life might not have revealed. To the end he was a man under authority, and subject to his Master. He was a simple spirit, of great profoundness. He knew how to rebuke and retain people’s affection and respect. He was a magnificent servant of Christ and he drew many to the same Lord.

He died on 7 December 1963, in the seventy-third year of his life, and the forty-seventh year of his ministry.

Thomas was born on 4 January 1890 at Wellingborough, Northamptonshire, to parents Amos Mayhew, a boot finisher (1901), and Mary Anne Peabody.

Before entering the ministry Thomas worked as a leather clicker in shoe manufacturing (1911).