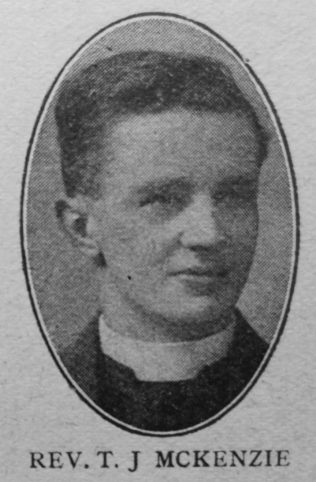 Transcription of obituary published in the Primitive Methodist Magazine by J.W. Slack

In the passing of the Rev. T.J. McKenzie at the early age of thirty-four, the Ministry has lost one of the most lovable and promising of its younger men. He was the son of the Rev. T. McKenzie, and was born at Littleborough in 1893. Part of his youth was spent at Derby, where he received a business training. He joined the Central Church in that town, and served it with characteristic devotion during the ministries of the Rev. C.P. Maynard and his own father.

In the year 1914 he entered Hartley College, and while there dedicated himself to the wider work of the mission field. Before going abroad he spent three years in the ministry at home, at St. George’s Hall; the other two at Biggleswade under the superintendency of the Rev. J.H. Saxton. In 1919 he went to Nigeria.

On this field Tom McKenzie spent three terms of service in three different spheres. For a short time he laboured at Jamestown, towards the end of his last term he laboured at Bende, but the major part of his time was spent at Oyubia, and there he made his distinctive contribution to the work of our African Missions. During his period of service on this station he saw it grow to fifty-three preaching places, thirty-five day schools, 1,198 members, and 1,055 catechumens. He took a handful of boys who had been gathered originally by the Rev. W. Norcross, and from this small nucleus he built up a central school numbering 200. This school is now on the government assisted list, and its present success is due, as others have testified, to the sure and splendid foundations he laid.

In everything he was loyally supported by Mrs. McKenzie, a missionary enthusiast herself, and the daughter of one of our early missionaries, the Rev. R. Fairley. In addition to his own work, he served with devotion and ability as Secretary of the Southern Nigerian Council of Missionaries. His colleagues in this wider organization pay their tribute to his skill and thoroughness, his mastery of detail, and the helpful way in which he contributed to any question under discussion. In all his service he was in labours more abundant, in his statesmanship wise and far-seeing.

His personal qualities were varied and striking, and had he lived he would have filled a still higher place in the missionary councils of our Church. All who knew him were impressed by his strength of character and tremendous reserves of courage. Moreover, he was the soul of loyalty—to the Church, which he loved with all his heart, to his colleagues in the ministry, and to those who- enjoyed the rich privilege of his friendship. He was blessed also with the saving grace of humour. This priceless gift never deserted him, and during the last few months of his life his gay and infectious spirit seemed more manifest than ever. This lighter side merely masked the fire of devotion that burned with such a steady and consuming flame; for he loved the people of Africa, did Tom McKenzie, and he had given himself without reserve to the missionary vocation, and his conversation and speeches, his outlook and bearing, and even the tone of his voice were shot through with the unction and grace of a lovable and consecrated personality.

He passed away suddenly. When he came home on furlough he was far from well, and his homecoming was shadowed by the unexpected death of his mother—a winsome soul. His leave was extended with the hope that he might regain his strength, but it was not to be. An attack of rheumatic fever during the cold spell of weather in December, 1927, proved too much for his enfeebled frame, and he died peacefully on Christmas Eve. The interment took place in Lincoln, and the funeral service was held at the Portland Place Memorial Church.

Thomas was born on 19 November 1893 at Littleborough, Lancashire, to parents Thomas McKenzie, a PM minister, and Grace Thirza Adams. He was baptised on 11 February 1894 at Weurdle-with-Wardle, Lancashire.

Before entering the ministry Thomas worked as a clerk (1911).

Nella continued as a missionary/teacher in Nigeria after the death of Thomas.