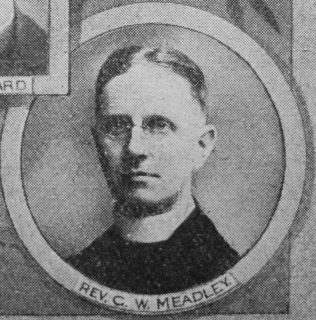 GEORGE WILLIAM MEADLEY: born at Beverley in 1878, where he received his early education at the Wesleyan Day School. After training at Hartley College, he entered the Primitive Methodist Ministry in 1904.

An example of the highest type of circuit minister, he gave himself without reserve to the work of God wherever he went. By solid and painstaking work he built up the churches in which he ministered in the faith, and zealously and carefully trained men and women for responsibility and leadership. In his circuits an unusual number of young men became preachers of the Word through his inspiration and challenge. His preaching was of a high order. He had a finely-equipped mind, an utterly dedicated spirit, and a deep love for the souls of men. Independent and keenly critical, he read widely and deeply that he might increasingly enrich his exposition of the Gospel of God’s grace in which he gloried.

He was a man of strong character and rich personality, a wise leader, a far-seeing administrator, a minister loved and trusted by his people. No stranger to sorrow and domestic affliction, he had the gift of true consolation. Forthright and sincere, he hated pretentiousness; as a meticulous and conscientious worker he abhorred anything slipshod and slovenly. He rejoiced in the love of the brethren, and was particularly welcome in ministerial study groups, to which he invariably contributed something of abiding value.

His ministry at Great Western Street, Manchester, in association with Hartley College, profoundly influenced many of the students, a number of whom gained a Gospel and a manly conception of the Ministry from him. During the last five years of his life the rigour of earlier days and continued self-expenditure began to exact a toll even of his strong frame, but ‘the inward man was renewed day by day’.

His final triumph and translation to higher service came on Sunday morning, 27th July 1947, in the sixty-ninth year of his age and the forty-fourth year of his ministry.

George was born on 18 August 1878 at Beverley, Yorkshire, to parents Thomas Barber Meadley, a cow keeper (1881), and Nancy Suddaby.

Before entering the ministry George worked as a printer compositor (1901).

He married Florence May V McDonald (1887-1923) in the summer of 1908 in the South Stoneham Registration District, Hampshire. Census returns identify one child.

He married Elsie Elizabeth Hartshorn (1887-1973) in the summer of 1929 at Leicester, Leicestershire.