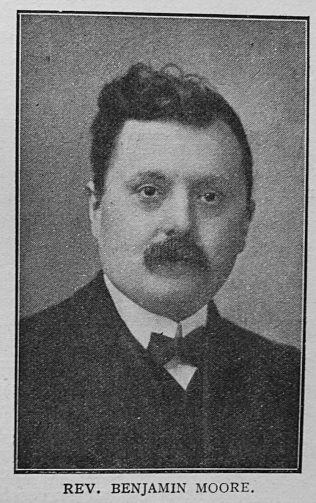 A transcription of the obituary published in the Primitive Methodist Magazine by S.G. Delafield is attached. He writes as follows regarding Benjamin’s preaching and interest in matters of social concern.

“His kindly nature, transparent character and cheerful spirit endeared him to many, and wherever he went he diffused the radiant hope and gladness of his own warm heart and enriched mind. He was an able preacher, his sermons showed originality of thought and were freely illumined by choice and apt quotations from his extensive reading. He prepared carefully for the pulpit, but when in the pulpit was always master of his subject and absolutely free from the use of notes. He was equally successful as a speaker on the public platform, when his ready wit and abundant humour were allowed fuller play.

Benjamin Moore was deeply interested in social questions — and was ever ready to expound and advocate the Christian solution. He once confessed himself a Fabian by tradition and temperament, in favour of revolution by reform rather than reform by revolution. He quoted approvingly Will Crook’s dictum that it takes three generations to solve a social problem—one to get at the facts, another to get at the cause, and a third to get at the remedy. He insisted that passion needed to be guided by knowledge, that social reform must be intelligent as well as impulsive.”

Benjamin was born on 23 November 1870 at Oakworth, nr Keighley, Yorkshire, to parents Joshua, a stone mason, and Mary. He was baptised on 10 March 1871 at a PM Chapel in the Keighley Circuit.

Before entering the ministry Benjamin was a spinning shuttle maker (1891).

He married Kate Pickett (1866-1952) in the summer of 1898 in the Cricklade Registration District, Wiltshire. Kate was the sister of Henry John Pickett, Frederick Pickett and James Pickett, all PM ministers.

Note: There were two Benjamin Moores born at Oakworth with births registered in late 1870. I have chosen Joshua and Mary as parents based on a record in a PM baptismal register.