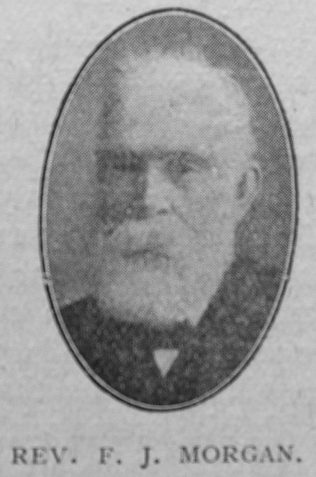 A transcription of the obituary published in the Primitive Methodist Magazine by Joseph Maland is attached. He writes of his ministry as follows.

“Francis Morgan was known everywhere as a man of marked individuality, and recognised as one who was ever striving to be true to himself, and as a consequence, he was always true to others. He had a happy habit of always seeing the best in people, and drawing forth whatever was good in them. He possessed in a rare degree the power of helping people to be what he expected them to be—this was especially true of his tender, stimulating relationship with his young people, troops of whom looked to him as counsellor and friend. All his work was done quietly, unobtrusively, without noise or parade, and all was done with care—as a duty from God to be done in harmony with His will and purpose, for in all his service he saw the hand divine. He always left his circuits better than he found them, and was held in high esteem by all who could appreciate faithful, loving, humble service for the Master, done in simplicity and singleness of heart.”

Francis was born in the spring of 1843 at Derby, Derbyshire, to parents Thomas Morgan, a PM minister and  Margaret Dinwoody. He was baptised by William Clowes.

Before entering the ministry, Francis worked as a saw smith (1861).