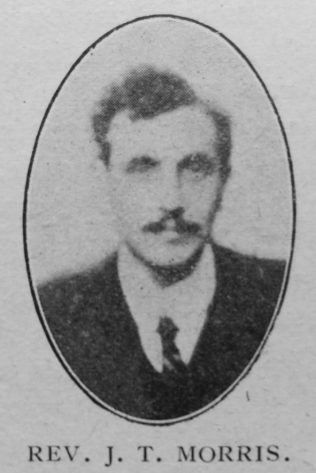 Transcription of obituary published in the Primitive Methodist Magazine by H.S. Millward

In the early death of the Rev. J.T. Morris the Church has lost one of its most promising ministers. Born at Old Badland, Radnorshire, in 1880, he received the call for the higher service on November 12th, 1915. The greater portion of his life was spent in the Herefordshire village of Pembridge. He was fortunate in being born in an essentially Christian home. The sturdy faith and unassuming dignity of his parents were daily before him as a fruitful example of a product of village Methodism. His mother  was a devoted counsellor and spiritual guide.

At the age of twelve he experienced that change of heart which impelled him into spheres of ampler service. The Church soon perceived his consecration was complete, and his abilities such as to warrant a call to preach the Gospel. At sixteen years of age he delivered his first sermon in the Leominster Circuit. So marked was his success, and so pronounced his aptitude for preaching, that the Quarterly Meeting unanimously recommended him as a candidate for the ministry. His entrance into college was itself a triumph; for all preparation had to be done in the scanty intervals of rest from regular employment. The same indomitable application marked his college days. None better avoided the peculiar perils of student life than he, or more profitably utilised its advantages. His physical endowments made all wholesome sport attractive, and an irrepressible buoyancy of spirit made participation in fun and frolic inevitable. But, as one of his college chums, the Rev. J. Kinnish, bears witness: “Morris came through grandly. He was no wastrel of opportunity, no betrayer of the Church which honoured him with her call.”

On the completion of his college course Conference stationed him at Farringdon; two years later he moved to Newhaven, and from thence to his first superintendency at Kingstone. On all these circuits assiduousness and zeal characterised his ministry. But if external evidence is needed to demonstrate his unselfish labours, his untiring devotion and spiritual fitness, it is to be found at St. Austell. His advent into the circuit inspired the dispirited societies into amazing enthusiasm and activity. With a consecrated audacity, characteristic enterprise and prodigal energy, he succeeded in building a new church at Bugle, installed a pipe organ, and raised all necessary funds, besides raising the membership from a mere handful to a figure never before reached. At the end of his fourth year on the station one hundred and twenty names had been added to the roll.

Unfortunately, such a prodigal expenditure of energy told its tale. While at Exmouth he contracted an attack of whooping cough, from which he made only slow recovery. He began his work on his last circuit (Exmouth) full of hopefulness, making plans, and laying himself out for fresh spiritual enterprises. However, it was not to be; serious complications followed the earlier symptoms. Against all advice he held on with incomparable tenacity to his post. He insisted on preaching when he should have rested, and worked when he should not have done so. But he was not the man to acknowledge defeat until sheer exhaustion compelled him. It was hoped a change of air and rest at Llandudno would assist his. recovery. The Master, however, had need of him.

The circuits on which he laboured are enriched by a powerful spiritual influence. His ministry assumed a maturity derived from constant contemplation of eternal interests. A deepening love of his Lord filled him with an ever-growing solicitude for the souls of men. He championed without fear or favour their interests and aspirations. It was his good fortune to find a partner who shared with him the joy of service. He lacked nothing which loving hands could minister. Much that he accomplished was only made possible through her unstinted devotion and attachment. To his wife and little one, for whose welfare he had a tender regard, our hearts go out in deepest sympathy.

The funeral, conducted by the Rev. H.S. Millward, took place at Pembridge, where, with a large company of mourners, the Revs. A.H. Kynaston, representing the General Committee; W. Woodley, who paid an eloquent and touching tribute to his old friend; G.C. Milsom, W. Wilcox, and M. Charles, attended to show their last respects. A memorial service was held at the same time at Exmouth,  attended by representatives of all the Free Churches in the town, and also at St. Austell.

John was born on 30 January 1881 at Old Badland, Old Radnor Parish, Radnorshire, to parents Benjamin, a shepherd (1881) and Mary.

He married Edith Mary Howe (1875-1969)  in the summer of 1907 in the Newhaven Registration District, Sussex. Census returns identify one child.