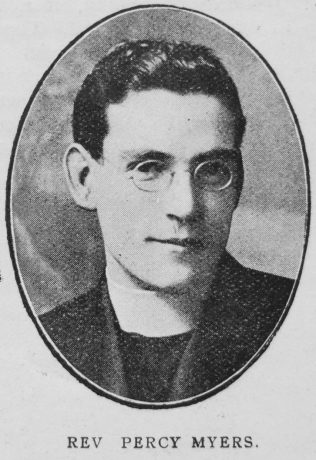 PERCY MYERS: born in 1891 at Walthamstow, London. He was trained for the ministry at Hartley College and in 1917 entered his first circuit, Selby, where he met the one who was later to be his wife and where they made their home on his retirement in 1953. During forty-one years of active ministry he also served in Beverley, Pickering. Bolton l. Derby II and Derwent), Darwen, Kiveton Park, Chesterfield (Holywell Cross and Staveley), Blackheath and Langley Green and Nottingham (North). He was not one to seek high places but aimed at being a sound circuit minister allowing no distraction to interfere with his dedicated work. His preaching was compelling and sincere and he used his gift for extemporary prayer most helpfully both in public worship and on more personal occasions. After his retirement he continued to preach in the widespread country circuit where he lived and his experience was useful to successive superintendents. When the Selby Council of Churches was formed he was appointed its first secretary and for his general services to the town and to Methodism he received the Maundy Money from the Queen at Selby Abbey in 1969. He was also the chaplain to Longwood Hospital. He never retired from the pastoral work of the ministry and was visiting those in need a week before his death. In the later years when his health prevented him from taking, regular preaching appointments he was a “tower of strength” at Brayton Methodist Church where he and his wife worshipped. He always had a welcoming word for preacher, visitor and member alike and was always ready and willing to step in at short notice to conduct worship. It was a rich occasion for him to share at Brayton Chapel in the celebration of Holy Communion on his eighty-third birthday. He died suddenly at his home on 23rd April 1974 in the eighty-fourth year of his age and the fifty-seventh year of his ministry.

Percy was born on 27 January 1891 at Walthamstow, Essex, to parents James and Elizabeth. James was a warehouseman (1891).