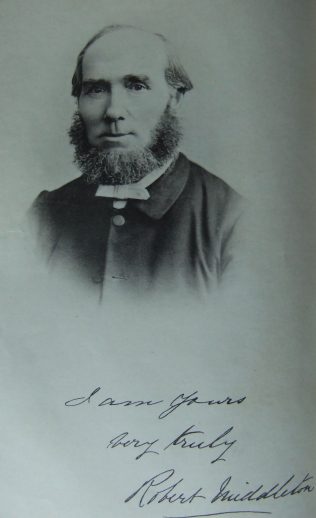 Robert was born on 28 November 1834 at Bradwell, Derbyshire to parents Robert and Hannah. Robert senior was a lead miner and Sunday School teacher.

Robert was a nephew of Joseph Middleton. He was converted under the ministry of Rev John Standrin on 2 June 1850. He soon was on the plan and leading a class. Before becoming an itinerant Robert also worked as a lead miner.

Robert’s obituary records that he did not aspire to rhetorical display, but he was well read, fluent of speech, and eminently practical in his discourses. He was a believer in the old fashioned Methodist doctrine.

His ambition was the salvation of souls and the prosperity of his own station, and in his efforts to secure this he walked some 100,000 miles to preach thousands of sermons to perishing sinners.

Robert died on 13 December 1901 at Bottesford, Lincolnshire and was buried at Bradwell.

H B Kendall, Origin and History of the PM Church, vol