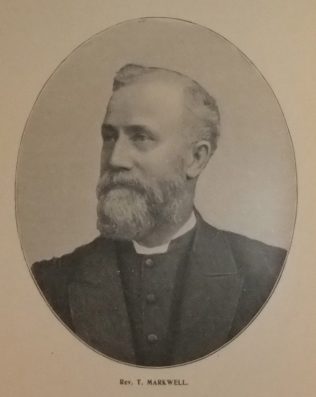 Thomas was born in 1843 at Barnsley, Yorkshire to parents William and Sarah. William was a linen weaver.

Thomas was a third generation Primitive Methodist. He was converted at the age of seventeen. His conversion was attributed to home influence and the efforts of Sunday school teachers. Thomas started to teach in Sunday school, but within six months of his conversion he received a note to preach. In 1864, Thomas became a hired local preacher in the Bradford circuit.

Thomas operated a linen power loom before entering the ministry.

Thomas was Building Committee Secretary for five years in the Carlisle and Whitehaven District. Later he was Missionary Secretary to the Bradford and Halifax District.

Much time was spent on his circuits in pastoral visiting. The most remote or the smallest place received due oversight and attention in this regard. He was a very tactful and welcome pastor, and much of the success which attended his circuit work was due to his faithfulness and kindliness as a visitor in the homes of the people.

The Manx Quarterley recorded that Mr Markwell’s preaching talents were not of the first order and they had not been improved by the education which is nowadays the privilege of students for the Primitive Methodist ministry: but, he was an industrious, tactful, sincere, and capable pastor and administrator, and he “wore well” in all his circuits. So long as health permitted, he gave assistance to the Douglas ministers during his retirement, and he was at one time ministerial secretary of the Isle of Man Free Church Council.

Thomas married Mary Ann Warters (1840-1925) in the summer of 1869 at Malton, Yorkshire. Thomas’ obituary records that Mary lost most of the use of her right hand through dye-poisoning while knitting during WW1.

Thomas died on 2 October 1921 at Douglas, Isle of Man. His funeral took place in Barnsley.