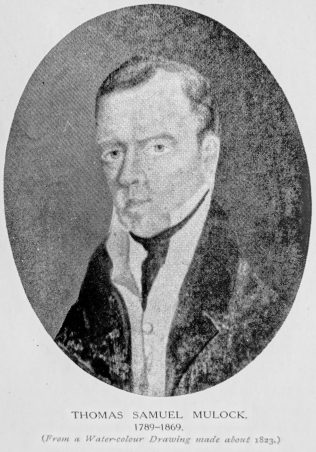 zoom
T. S. Mulock c.1823
Reproduced from A. L. Reade, The Reades of Blackwood Hill, plate IX, by courtesy of the Trustees of The William Salt Library, Stafford 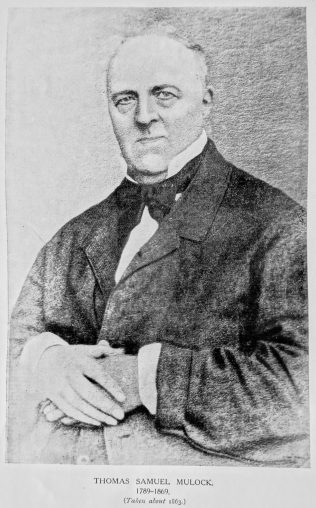 zoom
T. S. Mulock c.1863
Reproduced from A. L. Reade, The Reades of Blackwood Hill, plate IX, by courtesy of the Trustees of The William Salt Library, Stafford

Thomas Mulock, was an intelligent, strong minded man of considerable literary ability, which he used to advantage in religious and political controversy appearing as a preacher in the Primitive Methodist circuits of North Staffordshire and Cheshire during the middle and later years of the 1820’s when he is recorded as preaching at Boston, Brotherton, Burland, Chester, Englesea Brook, Oakengates, Preston Brook and Tunstall, but he then ‘disappears’ which invites the questions ‘who was he, what happened to him?’

Thomas Samuel Mulock was born at Killiney, near Dublin, in 1789, the second child and eldest son of Thomas Mulock, then Comptroller of Stamps and his wife Maria. While little is known to me of Thomas Samuel’s early years he appears to have been brought up in the faith of the Church of Ireland and left his native country, circa 1812, to set up in business as a merchant with his brother-in-law at Liverpool. There he became involved in political circles, supported the Conservative cause, became acquainted with George Canning – to whom he acted as secretary during an election campaign – and published articles under the sobriquet ‘Six Stars’. The business enterprise failed, bankruptcy ensued, causing Mulock, who by then had matriculated at Oxford, to abandon studies and embark on a career as a writer of theological pamphlets, discourses and letters which in turn led him to travel to the Continent, where he gave lectures on English at Geneva and Paris, becoming known to William Wordsworth, Lord Byron and Thomas Moore. Returning from the Continent in 1821 a stay in Staffordshire led to him preaching to dissidents at Stoke, where his reputation grew and he was able to gain sufficient support to open a chapel. Perhaps in keeping with the period and the tendencies of some religious ministers, he was apt to decry what he conceived to be the failings of members of his congregation, publicly identifying them from the pulpit. At this time Mulock also established a newspaper, The Public Inquirer and used this medium to lambast some parishioners with whom he had previously clashed in verbal altercation. Civil action followed, which Thomas lost, and in consequence Thomas, his wife – Thomas had married in 1825 a daughter, Maria being born in 1826, two sons Thomas, in 1827 and Benjamin in 1829 – lost their home and possessions and Thomas his chapel. Further problems followed including imprisonment for debt and confinement in a lunatic asylum from which latter situation he was not released until January, 1840. Thomas, his wife and family then moved to London, where he engaged in various business enterprises, later moving to Ireland then Scotland, where for a time he edited a newspaper, eventually returning to Staffordshire where he once again incurred legal displeasure and spent a long period as a prisoner for debt. Mulock never ceased to submit to public scrutiny his observations on matters that interested him, writing extensively on the Potato Famine and the Highland Clearances and succeeding in entangling himself in respective public controversies involving Prince Albert and Louis Napoleon, the Duke of Wellington and Sir Robert Peel also suffering some embarrassment following letters from Thomas.

Thomas Samuel Mulock died at Stafford in 1869 and was buried at the Castle Church cemetery. His daughter, Maria – from whom he became estranged for many years following the death of his wife in 1845 – became a celebrated author of the Victorian years, her most famous novel being ‘John Halifax, Gentleman’; his two sons predeceased him, Thomas in 1847, Robert in 1863, both in tragic circumstances. The following chapters give an account of Thomas Mulock’s journey through life, his eccentricities, beliefs and failings in all of which he never ceased to be an intriguing character and always remained a devoted yet puzzling Christian who was admired by Dr. Thom and virtually vilified Dr. Chalmers.