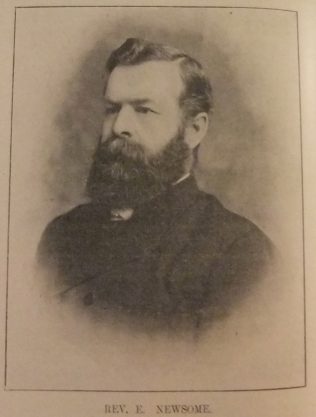 Edwin was born on 6 October 1844 at Heckmondwike, Yorkshire to Mary Newsome. He was baptised at St Peter, Birstall on 24 November 1844. The family home for many generations was Crabtrees Farm.

Early in life Edwin was sent to the Methodist Sunday School in Heckmondwike. On moving to Mirfield he connected himself with the Primitive Methodist Society. It was there that he gave himself fully to God. Edwin’s promotion in the work of God was somewhat rapid. He began as a Sunday School teacher and soon became the Superintendent, sick visitor, class leader, local preacher, and hired local preacher at Hoyland.

When Edwin went to Blackpool in 1875, it was designated as a mission station. He found a chapel partly erected, but great difficulties had arisen, but by becoming personally responsible for nearly £1000 he got the work through. At his next station, Haslingden, Edwin erected a large and costly chapel, became a busy centre of good work for many years. which

Edwin’s obituary records that he was a good man, and when full of strength, full of labours. His zeal was great, and he did splendid work which abides. He took no narrow view of his work, though soul saving and the culture of character were always first.

For some time he held seats on School Board and Board of Guardians.

He was an acceptable preacher, a genial visitor, a faithful friend, a man who realised the responsibilities and dignities of life.

Edwin married Sarah Ann Harrison (abt1842-1899) in the summer of 1872 at Huddersfield. Sarah and five of her children were buried at Blackpool. Census returns identify four of their children.