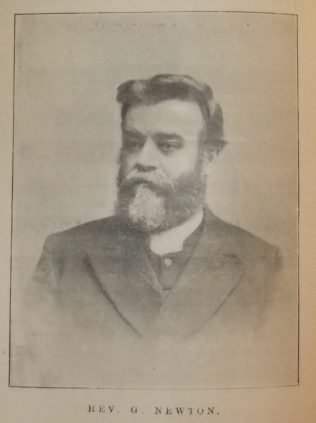 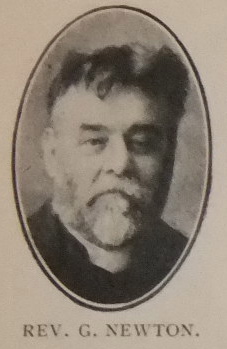 George was born on 16 November 1841 at Winster, Derbyshire to parents William Newton and Hannah Titterton. His parents were both Primitive Methodists. His father was a lead-miner and local preacher.

George had little education as a child. He was apprenticed to the grocery and drapery business.

George was converted at the age of seventeen. There came a sense of new obligations and responsibilities, along with an earnest desire to fulfil them faithfully. As a consequence he applied himself to developing his intellect. He became a local preacher two years later.

As a result of business, George moved to Sheffield. There, he became an earnest mission worker, doing effective open-air preaching in connection with the George Street Mission. He was recommended for ministry in 1866.

He preaching was not what some would call popular, but it was sound, solid and profitable. He was more practical than doctrinal, more evangelistic than philosophic.

As an administrator, George was shrewd and practical; a lover of peace and a healer of breaches. He possessed the saving grace of humour which was often dry and caustic, and which gave a piquancy to many of his sermons.

After superannuation, George moved to Blaydon on Tyne, where he served the circuit in a special capacity.

George married Emma Susanna Smith (1845-1905) in the summer of 1871 in London. Emma was the daughter of Robert Smith. Census returns identify three children.