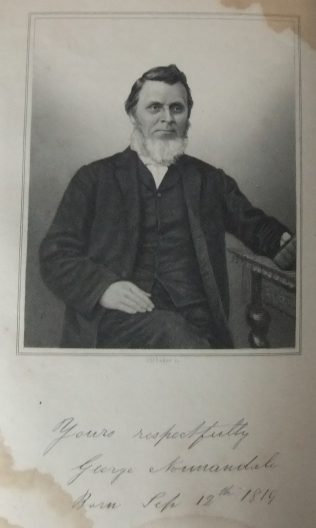 George was born on 12 September 1819 at Thornholm, nr Bridlington, Yorkshire to parents Mark Normandale and Mary Collinson. His parents were both Primitive Methodists. PM services were held in his parents home and George was converted at the age of 12. He had to leave home soon afterwards, going to a place where there was no PM Sunday School. He went astray.

Later he went to Bridlington where he was apprenticed to a shoemaker. Here he was restored into the PM fold on Christmas Day 1837. He soon was on the plan as an exhorter and local preacher.

His obituary records that after becoming a superintendent, George evinced an aptitude for dealing effectively with chapel property, either by erecting new chapels, altering and improving existing ones, or by reducing debts.

He preached ‘Christ and him crucified’, simply, faithfully, affectionately and earnestly, and many were the ‘seals of his ministry’ and will be ‘ the crown of his rejoicing in the day of the Lord.’

George pledged to total abstinence in 1837. He worked hard and successfully for an organisation known as ‘Good Templarism’.