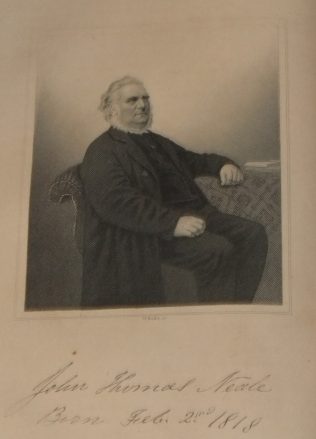 John was born on 2 February 1818 at Griffydam, nr Ashby de la Zouch, Leicestershire. The family soon moved to Ansty, nr Leicester. John’s father was a PM local preacher and class leader and often entertained travelling preachers in their home. John was converted under a sermon preached by Francis Warner of Leicester at Ansty. He soon became a local preacher.

John’s obituary records that he was exceedingly hospitable. To entertain friends at his table was a grand source of satisfaction and joy to him. He had a large heart and was full of compassion and sympathy for the poor and oppressed. He hated meanness, denounced tyranny and injustice with fiery vehemence and championed the cause of the weak and struggling with all his might.

As a preacher and platform speaker he excelled. He suffered from a speech impediment, but as he warmed to his work his stammering ceased and the discourse flowed on in smooth and easy style.

John died on 30 July 1888 at Lincoln and was buried at Ripley, Derbyshire.