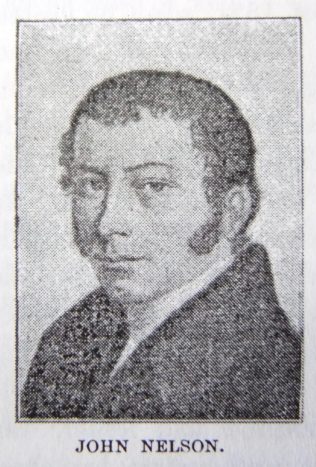 John was born on 6 December 1798 at Disforth, Ripon, Yorkshire.

He was converted on 22 October 1816 and became a local preacher the following year.

Kendal writes: “John Nelson entered the itinerant ranks in December, 1820.  He had the advantage of his brother as to physique, being tall of stature and strongly built, his countenance pleasing, and his presence commanding. In him were united zeal and industry, considerable intellectual power and fluent utterance – a combination of qualities which naturally rendered his ministry popular and attractive. John Nelson entered, too, the ranks of authorship; but he took his place there as the precursor of J. A. Bastow, John Petty, James Garner, and Thomas Greenfield, not as a Biblical scholar or systematic theologian, but as a preacher still. The volume of “Sermons and Lectures” he published – the bulkiest and highest-priced book as yet given to the press by a Primitive Methodist preacher – was a souvenir of his ministry in Hull in 1828-9. It consisted of a series of discourses – doctrinal, practical, and experimental – delivered on Sunday evenings when, in his turn, he occupied the town pulpit.”

Petty records how John and George Cosens, a native of the West Indies, were sent to mission Dorset by the Sunderland Circuit. Unfortunately there was a falling out between the two which eventually resulted in Cosens leaving the Primitive Methodist Ministry for the Baptist Church and John leaving to become a Methodist New Connexion Minister. More information is given on this story in an article by H. Bickerstaffe Kendall, published in the Christian Messenger in 1914. A full transcription of the text is attached.

John married Mary Wesleby (b abt1794) of Barton, Lincolnshire. She died before the 1861 census, possibly in Bradford in 1860. Birth records identify two daughters.

Oliver A Beckerlegge, United Methodist Ministers and their Circuits, 1968

Sons beyond the Door (54 KB Adobe Acrobat document, opens in a new window)
Transcription of an article in the Christion Messenger 1914, which tells the story of two travelling preachers who left the PM Connexion.