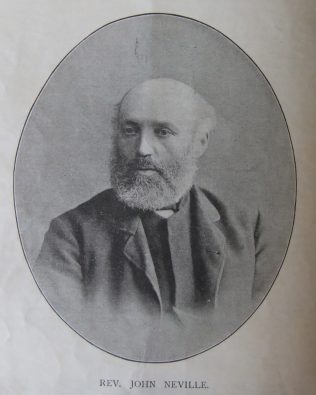 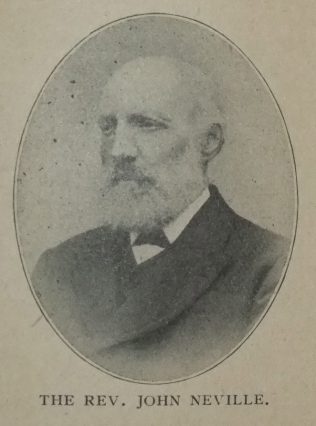 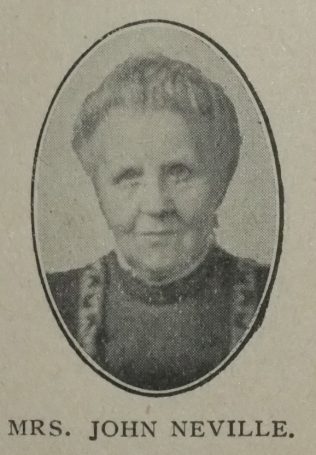 In 1851, John was working as an agricultural labourer.

John was converted quite young and joined the Primitive Methodists who had commenced preaching in the area. In turn, he became a prayer leader, exhorter and local preacher. In parallel, he self studied to compensate for his lack of formal education. He was pledged in 1861 by the Newbury circuit.

As a preacher, John was thoughtful and earnest, aiming to build up the people in a robust Christian life.

John spent 8 years on the Probationers Examination Committee. He spent 14 years as Secretary of the District Committee. When he retired his colleagues presented him with an easy chair.

John married Sarah Ann Moon (1843-1921) on 2 January 1882 at Hackney, London. Sarah was a head-teacher of a British School and then ran her own private school in Cirencester before her marriage.

THE REV. JOHN NEVILLE: CLOSE OF A USEFUL LIFE

The passing of the Rev. John Neville is deeply lamented by a wide circle of friends, both in Newbury and elsewhere, to many of whom his loss is felt to be a personal one.

His death took place on Thursday last at his residence, Gloucester-road. Excessive labours incident to the life of a Primitive Methodist Minister, together with night travels along country roads, mostly on foot, had contributed to a bronchial tendency from which he suffered in the later of his life with increasing severity. The attack which overtook him about a month ago proved to be fatal, his condition from the outset showing an extreme degree of weakness.

Born in the month of August, 1839, at Minster Lovell, in Oxfordshire, he received his education in the village school and being trained in the Church Sunday School, he was presented for confirmation to Bishop Wilberforce, though his parents were identified with the Primitive Methodist Society. Subsequently he cast his lot in the latter, and became a local preacher, his gifts and character impressing the authorities of the Witney Circuit that they recommended him as a candidate for the regular ministry, and this was followed by an invitation from Newbury in the year 1860. Mr. Neville has told how on the morning of his leaving home that the members of society gathered in his mother’s cottage at five o’clock for prayer for their “young brother” about to enter upon new and responsible duties. Afterwards he took conveyance to Oxford and came on by cart(?), preaching that same evening in Newbury.

In those early days ministerial candidates had no three years college course as at present, but entered at once upon their sacred calling, being placed under the care of a senior minister for instruction in subjects which for four years they had to submit themselves for examination. Sternly resolved to overcome the disadvantages in which he found himself placed from want of a better education, Mr. Neville was accustomed to continue the practice of early rising as in his village days, and would rise between four and five o’clock, and wrapping himself in the blankets of his recently left bed, would wrestle with chapters of moral philosophy and struggle with textbooks of theological and kindred subjects.

It seemed as if Newbury was to be the “pivot” circuit around which he was ever and anon to work. After spending two years here, he removed to other sphere of duty, returning again seven years hence for a period of one year, and again 30 years later, namely, 1898, when he accepted what proved to be his last engagement; here he continued in the superintendency until 1905, when his request to be placed on the retired list was complied with. This meant no cessation to his activities, for he continued to labour as health and opportunity permitted, not confining himself to his own denomination, but his assistance was sought by other Free Churches for pulpit supplies.

Throughout his career, Mr. Neville continued to be a close and continuous Bible student. His reading was ever with a view to enrich his pulpit ministry, which was always exercise to encourage higher Christian duty and experience on the part of his hearers; at the same time he kept himself abreast with questions of the day, and his message was so often indicative of insight that it came with the force of a revelation. Though his gentle spirit was opposed to war, and appalled at the bloodshed of recent years his discourses at this time were adapted in their thought and influence to steady men’s minds, confirm them in divine truth as being the key to the solution of the many complex problems of the present day. He was a truly diligent and loving pastor, his cheerful radiant personality making him ever welcome in the homes of his people to whom- by sympathetic and cheerful visits – hearts were cleared, burdens eased, and soul prospects brightened.

He loved young people and by the charm of his refined and subtle nature he won their affection. Active in support of temperance, he was truly catholic in spirit, and his memory will to many be a perpetual inspiration.

The funeral too place on Tuesday afternoon, the service being held at the Primitive Methodist Church, which was filled with those wishing to pay the last token of respect to a departed friend….

Long list of mourners and those at church etc.