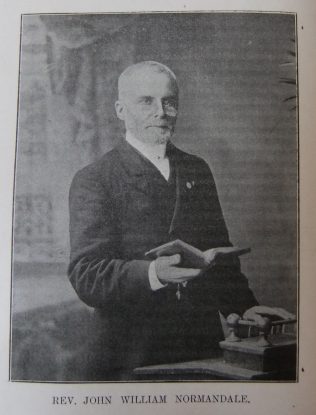 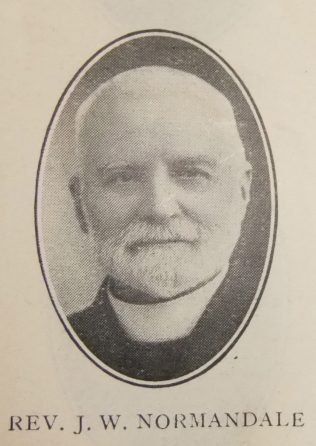 John was born on 6 April 1847 at Keighley, Yorkshire the eldest son of parents George Normandale and Mary Ann Oldroyd. George was a PM Minister. Mary Ann was brought up within the Society of Friends.

John was converted on 25 March 1858 and soon started to give public witness for Jesus. He was given a note to preach in September 1862, became an exhorter in April 1863 and was fully accredited in July 1864. John prepared for the ministry at Elmfield College in 1867 under the mentorship of John Petty.

The 1906 biography in the Primitive Methodist Magazine describes him as a plodding, unpretentious minister; his real qualities were not on the surface. He had no ambition for official life, although he represented his district at Conference and was Secretary of the District Meeting for a while.

John’s greatest success was at Minsterley where at one place 120 professed conversion and some 10-12 went on to became local preachers.

John was a lifelong teetotaller and champion of the Temperance Movement.

After superannuating, John moved to Liverpool. When his second wife died, his daughter Mary, who had spent many years in the United States, returned to look after him.